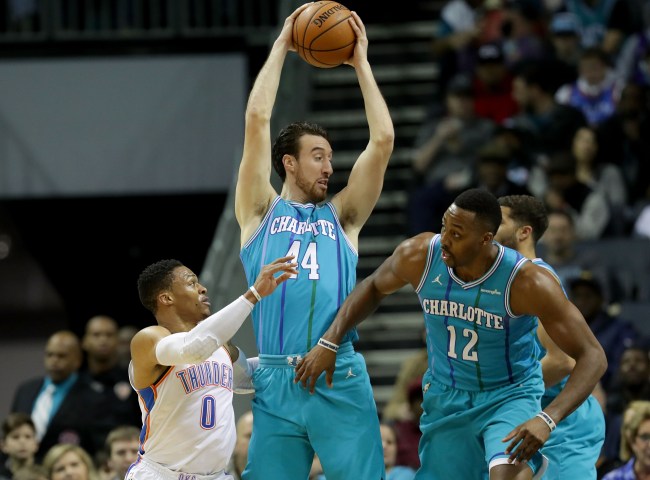 The average American in 5.93 inches tall. Charlotte Hornets center Frank Kaminsky is much taller. The 25-year-old former National College Player of the Year stands 7 feet 0 inches tall, and he is reminded every time he nearly drills his head on a door frame or has an urge to ride a roller coaster.

Kaminsky, who is one of three seven footers on the Hornets roster thanks to the recent acquisition of Timofey Mozgov, joined The Dan Patrick Show on Thursday to discuss the pros and cons of being freakishly tall.

Frank Kaminsky: “There’s such a misconception that being seven feet tall is such a disadvantage on so many things. There’s things that I can’t do, like I can’t go on roller coasters anymore but I don’t care because I never really liked roller coasters to begin with. I need extended golf clubs. There’s things I have to do because I’m seven feet tall, but it’s awesome being this tall. It would suck to be really short, in my opinion.”

Dan Patrick: “There has to be some negatives, like you run into doorways and light fixtures, things like that, right?”

Frank Kaminsky: “Yeah, because I’m really bad at texting and walking at the same time. So I tend to do that quite often.”

Don’t pity Kaminsky’s inability to ride roller coasters or purchase standard golf clubs. His height is a huge reason he penned a 4-year, $11.8 million contract with the Hornets. The Wisconsin product also revealed that his height plays in his favor when it comes to the ladies department.

Frank Kaminsky: “Seven feet, no question…. When you’ve five feet tall, that is such a disadvantage with women. It’s unbelievable. That’s my official stance…. I’ve seen my short friends try to go after women, and it doesn’t work out very well. I’ll take being tall over being short, just for that fact alone.”

Another perk of being so damn tall is that you can pretend like you’re in the NBA, even if you aren’t. My colleage, Connor Toole, is 6’10” and he used it to go viral, which is better than anything money can buy. Kinda.