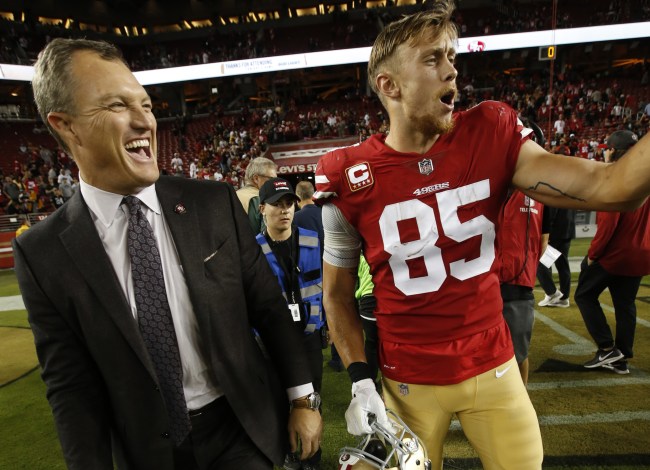 Man, George Kittle really knows how to play with the emotions of people. For all those fans of the San Francisco 49ers, scrolling through Twitter on Thursday may have momentarily given you a heart attack, because the team’s outrageously talented (and hilarious) tight end played an epic April Fools joke that some probably didn’t find too funny.

Posting a picture of himself donning the black, gold and teal jersey of the Jacksonville Jaguars, Kittle faked people out by declaring he had been traded to the AFC South team. The level of detail made the tight end’s Twitter post believable, with the photo and the Jags’ team hashtag, #DUUUVAL, included. Take a look below at the perfectly executed joke.

Next chapter… thanks to the faithful for all the support! #DUUUVAL pic.twitter.com/AlkXlRe3J9

Of course, not everyone found George Kittle’s April Fools joke to be so well-timed… or funny. One of those people was 49ers GM John Lynch, who didn’t appear to be laughing much after seeing the photo of his All-Pro tight end wearing another team’s uniform. Here’s how Lynch replied to the image on Twitter.

Just came out of Draft Meetings for the day. Not funny @gkittle46 https://t.co/4OLoxFRceI

Imagine being Lynch in that situation and seeing this image of Kittle in a Jags uniform. I assume those draft meetings were long AF and a bit stressful, and, instead of walking away from them with a clear mind to tackle other tasks in the day, he gets the shocking news of George Kittle being traded. Yeah, lots of emotions probably ran through him at that moment.

While Lynch wasn’t amused with the April Fools prank, that didn’t stop Kittle from replying with, of course, another hilarious message on Twitter. Instead of apologizing for the joke, he one-upped John Lynch, posting a message reminding him that’s it’s OK to have a little fun during this NFL offseason.

Talk about some balls from George Kittle, huh? Not only does he punk the entire football world with his April Fools joke about a fake trade, but after his boss told him how unamused he was by it, the tight end doubles down with the perfect GIF of Jim from The Office. You’ve got to love stuff like this.

While Kittle’s prank may have just been part of an April Fools, it could’ve led some San Francisco 49ers’ fans to go crazy upon seeing it, wondering what the hell the team was doing. Given the crazy NFL offseason we’ve seen already — with big-time names changing teams (seemingly) every day — and other rumors about superstars flying around, the tight end sure did pick a good year to try and pull a quick one on everybody. Well played, dude.