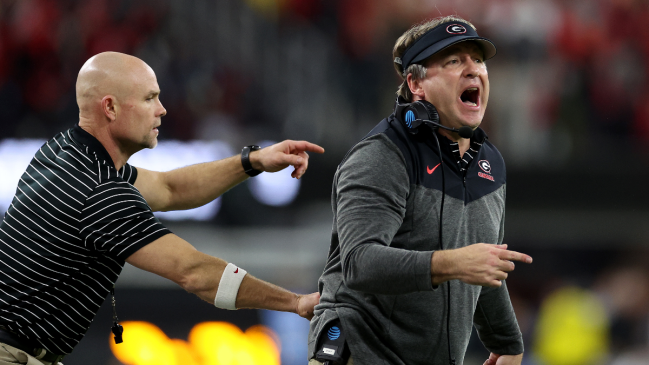 The Georgia Bulldogs dominated just about anybody and everybody that got in their way during the 2022 college football season.

That culminated with the Dawgs’ second straight national championship after a 65-7 demolition of TCU in the College Football Playoff championship game.

Senior quarterback Stetson Bennett had a dream season, throwing for 4,127 yards and 27 touchdowns on the way to being named a Heisman Trophy finalist. But one area that Georgia was surprisingly lacking was the wide receiver position.

The Dawgs lost star wideout George Pickens to the NFL and the year prior and relied heavily on star tight ends Brock Bowers and Darnell Washington.

Slot receiver Ladd McConkey hauled in 58 passes for 762 yards and seven touchdowns, but he’s far from the dominant force you’d expect at a program of Georgia’s caliber.

So head coach Kirby Smart quickly addressed that issue in the transfer portal. The Bulldogs landed one big piece in Missouri transfer Dominic Lovett. They then added another in Mississippi State transfer Rodarius “RaRa” Thomas.

But now it appears Thomas may never actually play for the Bulldogs.

Police arrested Thomas early Friday morning on a pair of charges, including felony false imprisonment according to ESPN’s Mark Schabach,

Thomas, a junior from Eufaula, Alabama, recently transferred to Georgia from Mississippi State. He was being held at the Athens-Clarke County Jail without bond. He was arrested by University of Georgia police at 4:40 a.m. ET Monday, according to jail records. Additional details of the incident weren’t immediately available. – via ESPN

Thomas caught 44 passes for 626 yards and seven touchdowns for Mississippi State a year ago. Now, the 6-foot-1, 192-pound junior faces an uncertain future.