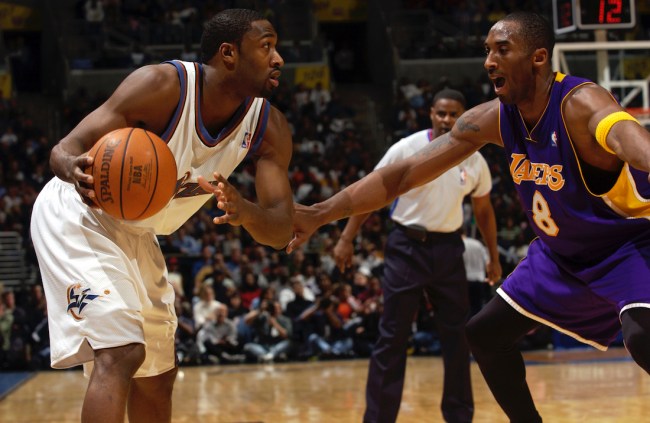 When Gilbert Arenas was at his peak, he was one of the most lethal offensive players in the NBA, effortlessly scoring at will as a member of the Washington Wizards. Unfortunately, after that whole locker room incident that involved pulling a gun on a teammate — which got Arenas suspended for a bunch of games by the league — Gil was never really the same player, with injuries being the main culprit holding him back.

That didn’t mean other teams weren’t interested in at least adding him to a roster to see if he could resuscitate his playing career, with one of those teams being the Los Angeles Lakers, who met with Arenas about joining them late in the 2011 season. But Arenas wasn’t having any of it, and, in his own words, “sabotaged” the free agent meeting instead.

As the story goes, about a decade ago, the Lakers figured Gilbert Arenas could help the team try to win another title. But instead of teaming up with Kobe Bryant, Arenas was straight-up honest with the Lakers, turning down the opportunity because he knew he wasn’t the player they — nor Kobe — thought he still was at that time. Talking to Dan Le Batard on his South Beach Sessions podcast, here’s what Arenas said about his meeting with Los Angeles 10 years ago.

“I botched the meeting. I sabotaged it,” Arenas said in his appearance on Dan Le Batard’s “South Beach Sessions” podcast.

“They’re asking me, ‘When can you be ready to come?’ Maybe a month? It’s March. To be honest you don’t really need a player like me. You just need to tweak the second unit, make them a little faster and you guys are perfect.

And that was my answer. Like you didn’t really need me. Thirty days (left in the regular season), so I can go back home. I’m not coming to L.A,” Arenas said.

“You guys are going to crucify me. “That’s when Kobe came out and said, ‘I want Agent Zero.’ And I’m like, with all due respect, Kobe wants a player that no longer exists mentally.”

This is pretty fascinating, and really gives a candid view as to where Gilbert Arenas’ head was at at that time. Like, he could’ve done what plenty of current NBA players do — join forces with a superteam in hopes of getting a ring before retiring — but, instead, decided to turn down the opportunity of joining the Los Angeles Lakers. It’s a little odd to hear a competitor like Arenas reveal the decision, but, deep down, he knew he wasn’t the player some still thought he was. Pretty honest, actually.

Instead of signing with the Lakers and competing for a title, Arenas opted to sign with the Memphis Grizzlies late in the 2012 NBA season, playing in just 17 games and averaging a paltry 4.2 points per game in about 12 minutes per game. Not great numbers for a guy who used to be able to drop 50 on opposing teams in a blink of an eye, but clearly a better situation than playing across the country for the Lakers and being unhappy the entire time.