Gillian Robertson Got Eye Gouged By Priscila Cachoeira, Still Choked Her Out With A Second Left In Round 1 At UFC 269 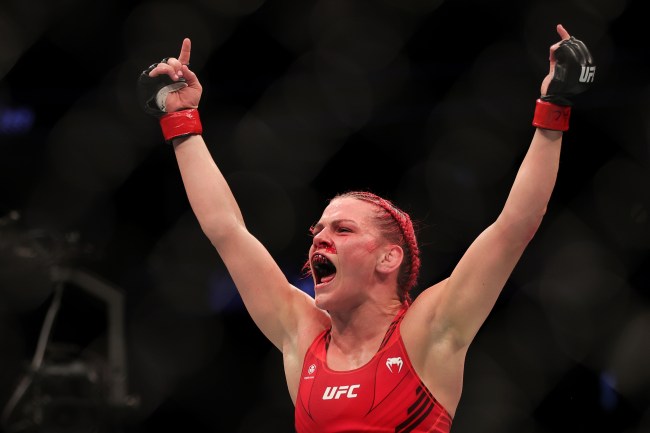 We’re less than 10 minutes into the UFC 269 broadcast and things have already gotten very interesting in Vegas. The first fight of the night featured some dirtiness and the first finish of the night.

Early on, the fight was going exactly as planned for Priscila Cachoeira. She was able to stuff Gillian Robertson’s first few takedown attempts and land a little bit on the feet. About halfway through the round, Robertson landed her first takedown and took over from there.

She dominated Cachoeira from the top, controlling position and landing some big shots from the top. Then, while Cachoeira was trying to work her way back up to the feet, Robertson got a hold of head and hopped on her back.

While they were going to the ground, Robertson slipped an arm under Cachoeira’s chin and was able to sink in a rear-naked choke. While Robertson was working for the tap, Cachoeira clearly started trying to dig her thumb into her eye.

It wasn’t enough to stop Robertson though, and she got the tap with 1 second left in the first round.

THE SAVAGE GETS THE TAP AT THE LAST SECOND 🤯

The win was Robertson’s 5th submission win in the UFC and moves her to 10-6 in her career. It also gets her back on track after loses consecutive fights for the first time in her career in her last two fights.

Cachoeira drops to 10-4 and will likely be cut thanks to her dirty tactics and 2-4 record in the UFC.

Gillian Robertson definitely deserves a step up in competition after easily dispatching the overmatched Cachoeira.