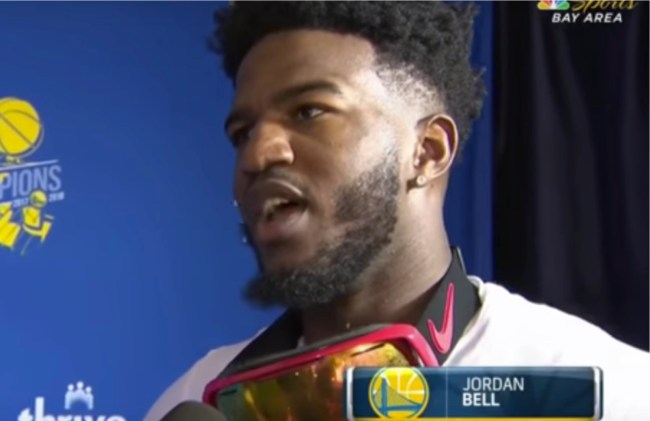 The Golden State Warriors are the crème de la crème of basketball teams, having won three of the past four NBA titles and reaching the NBA Finals in all four of those seasons. The team boasts two of the top five players in the league and starts an All-Star at every position; and, oh, yeah, has a sixth man who was once an All-Star and Olympian, too. Overall, the Dubs are loaded.

But being loaded with talent doesn’t always mean you’re the fun guys. And, unfortunately, the team’s Jordan Bell found out that the Golden State Warriors don’t take pranks too well.

For those who may not know the story, The Athletic reported yesterday that Jordan Bell was suspended for this past Wednesday’s game against the Memphis Grizzlies for what the team said was “conduct detrimental to the team.” Immediately, everyone had a theory as to what that might’ve been. Did he miss meetings? Did he show up late to practice? Probably something boring, right? Either way, the one-game suspension would cost Bell a game salary of over $9,500, so it was a major hit to his wallet.

The one-game suspension will cost Jordan Bell $9,505. The Warriors will not receive a tax credit because the fine was team issued. Bell is a restricted free agent this summer.

Then things got a little bit more interesting, though, because The Athletic reported that the bad conduct was actually an unauthorized hotel charge made by Jordan Bell on Warriors assistant coach Mike Brown’s tab. That’s when everyone made jokes about Bell being caught buying naughty vids, or a steak dinner or a nice champagne. Sadly, here’s the truth: the Golden State Warriors suspended Jordan Bell one game for a $15 hotel prank that involved a candle which was payback for a prank veterans played on him as a rookie last season. No, I’m not joking.

According to the San Francisco Chronicle, a source close to Jordan Bell said that a Twitter thread from a user named GRADS was a “pretty accurate account of how things went down.” Here’s a recap of what that thread said.

So, as all teams do IN EVERY PROFESSIONAL SPORT, the vets mess with the rookies because it’s just a “rite of passage” to say the least. So what had happened was last year, when he was a rookie, his teammates would put LITTLE THINGS on his room, candy bars, sodas, etc etc

Keeping on snitching media please. All clickbait ain’t good clickbait. Keep on following these “insiders” though. ✌🏽

That’s some serious BS, man. In a long, grueling, 82-game season, athletes are going to do things like this to entertain themselves. And, while the Chronicle does say that Jordan Bell has shown up late to workout and skipped an optional practice after an early playoff game last season, the fact that the Golden State Warriors would suspend him a game and make him lose out on over $9,500 while doing so is the most bogus thing I’ve ever heard. This should just make NBA fans loathe the Warriors even more now.