Man U. Captain Harry Maguire Spent The Night In A Mykonos Jail After ‘Attacking Police’ Following A Bar Fight 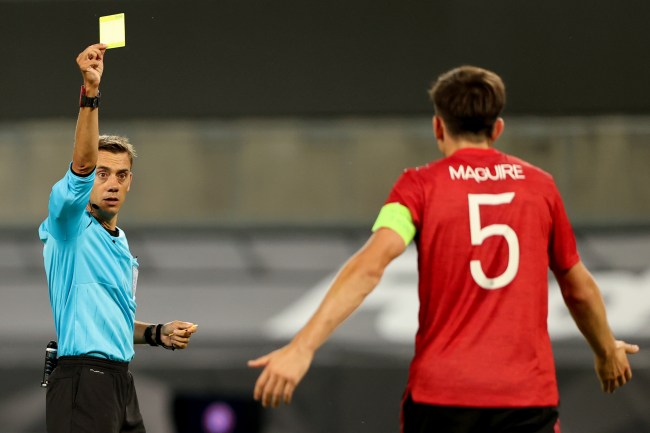 Manchester United Harry Maguire spent the night in a Mykonos jail according to reports coming out of Europe this morning. The Manchester United defender also plays center back for the English National Team and is one of the more high-profile English-born players in the game these days thanks to his (then) world-record £80 million fee when he transferred to United.

Harry’s been on vacation with friends and fellow teammates after the season wrapped up. The Daily Mail reports that Maguire was arrested after he and some friend got into a fight with some fellow Englishmen outside of a bar in Mykonos. The police arrived to intervene and things got worse from there. According to the report, one of the officers suffered injuries to his face.

Here’s the rundown from the Daily Mail:

Maguire, 27, spent the night in a cell along with two other men thought to be fellow players aged 28 and 29, and the trio are expected to appear before a state prosecutor on the nearby island of Syros later today. One of the charges is of aggravated assault after two of the officers suffered facial injuries.

The centre-half was yesterday pictured drinking at a pool party at SantAnna Bar with fellow United youngsters Marcus Rashford, 22, and Brandon Williams, 19, as well as Love Island star Chris Hughes, 27, and snooker player Judd Trump, 31. It is not clear if anybody at this party was with Maguire later that evening. Police today said that two groups of Englishmen were brawling outside Mykonos’ Fabrica bar in the early hours of Friday morning and when they tried to intervene they were rounded on by three men.

‘When the brawl was all sorted out, one of the two groups – with the football players – started verbally abusing officers. There were several policemen there. At some point, one of the three members of the group – they were aged 27, 28, and 29 – threw a swing at one of the policemen and a fight ensued.’ Petros Vassilakis a police spokesman said. ‘All of the three were arrested but during the effort to do so, the other two, including the football player, got violent also. They threw down at least two policemen, hit them with their fists and kicked them. (via)

There is a curfew in place right now due to the virus but there were reports of raucous behavior outside of a bar after the curfew hours. Harry turned 31-years-old on Wednesday and plenty of pool and party pictures have been shared on Instagram in the past few days from Harry’s friends, family, and his colleagues Marcus Rashford and Brandon Williams.

I really have no frame of reference for what the fallout from this would be. If you attacked a cop in America and left them with face injuries you wouldn’t be getting out of jail anytime soon now matter who you are. But the European criminal justice system is almost unrecognizable from our own so I’m really not sure what comes next for him.

Spending time in a foreign prison ranks near the top of my list of things I never want to experience. I came pretty close years ago in Bocas del Toro, Panama after high-speed car chase coming back from the beach when someone yelled ‘gun it’ so the driver stepped on it.

Ultimately, we got back to the hotel, scattered, the police found me first and tried to cuff me immediately but I didn’t have my passport (locked in the room) and a hotel employee came out and told them I was at the hotel the entire time. This was despite the fact that I was only wearing board shorts and holding an armful of wet and sandy towels. But that nearly took a turn into becoming one of the worst nights of my life and instead became a great story with details I really can’t share here.

If I had to power rank the foreign jails I’d be okay spending the night in then Mykonos would probably rank near the top. It’s a European paradise. A place that relies on tourism year-round to remain a vacation oasis for the affluent. Those comforts