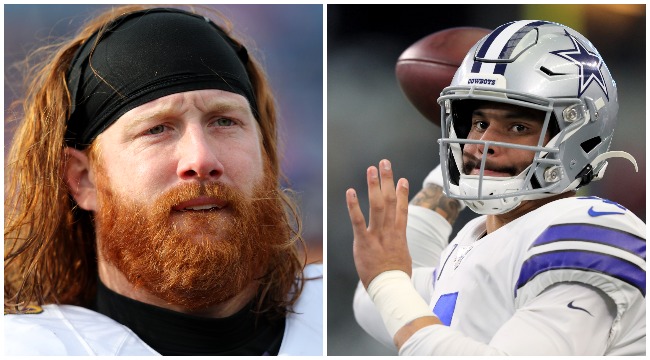 Somewhere in a dark room, under a framed posted that reads “Vulnerabilities Are For Pansies,” Skip Bayless is seething at the content you are about to consume.

Earlier this month, Bayless ventured from harmless troll to harmful asshat when he criticized Dak Prescott for showing “weakness” after revealing he suffered from depression over his brother’s suicide in April.

The world has yet to burn to the ground because for every one Skip Bayless, there are two Hayden Hurst’s.

The Falcons tight end, who attempted suicide in 2016, shelved his frustration with blowing a 20-point lead Sunday to express his gratitude to Prescott for having the courage to open up about mental health.

Hurst revealed earlier this year that while at South Carolina, he woke up handcuffed to a hospital bed after he blacked out and cut his wrist in his apartment. His friend found him in a puddle of his own blood and called 911.

His mental health struggles were exacerbated by his struggles as a minor leaguer with the Pittsburgh Pirates. Hurst, who walked away in his second season after being affected by “the yips,” was drinking every day to deal with falling short of his own expectations.

The 27-year-old has since founded the Hayden Hurst Family Foundation with his mother to raise awareness for mental health issues in children.

“I don’t have the answers to fix all of this,” he said. “It’s still a trial and error to this day, but I will say I have much more good days than I do bad days. I’m not this superhero that’s portrayed on TV. I’m a regular person. I struggle with depression, anxiety and things like that.”

Hey Skip, if you’re reading this, eat my ass!