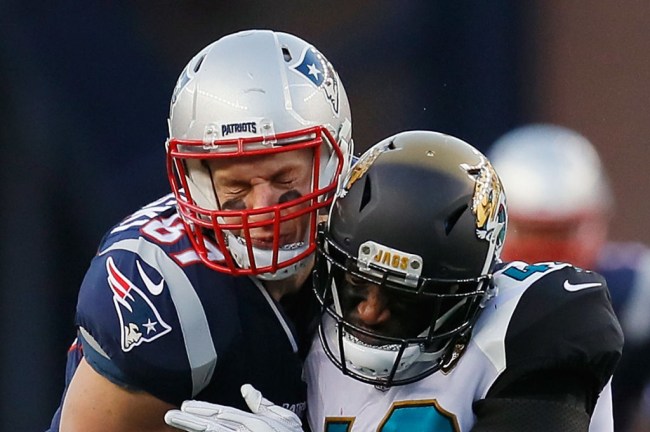 Plenty of Patriots fans held out hope that Rob Gronkowski would return for a tenth season after a year’s worth of speculation concerning his future but the legendary tight end would ultimately decide to retire thanks to the toll football took on his body over the course of his time playing the sport.

In the months since Gronk’s announcement, we’ve been treated to a number of details about the factors that led to his decision, as he shared he suffered a major injury during Super Bowl LIII and was also forced to deal with a buildup of fluid in his brain after being on the receiving end of countless hits.

However, not everyone believes Gronkowski is actually done playing football, and while Tom Brady doesn’t seem to think he’ll be returning any time soon, plenty of other people think it’s only a matter of time until he stages a comeback.

Gronkowski recently said he’d only need a month if he did decide to reverse course, and based on the shirtless picture he posted over the weekend, he would appear to still be in football shape.

Gronk is back in Gillette Stadium and looks to be close to playing shape pic.twitter.com/MfvwjUCVHl

However, based on the evidence at hand, Gronk should probably never play football again based on a chat he recently had with CBS News.

Rob Gronkowski tells @CBSNews he "probably had, like, 20 concussions" in his life and that "I remember five blackout ones." Yikes. pic.twitter.com/3UKmknWjqD

During the segment, Gronkowski was asked if he’d let his son play football if he ends up having a kid and confirmed that he would. However, he said he’d warn his offspring about the dangers of the sport and revealed he estimates he suffered 20 concussions over the course of his career—five of which he can’t even remember.

As much as I’d love to see Gronk play again, given this revelation, I sincerely hope he thinks twice—and then a third time, and then a fourth time—about coming back.