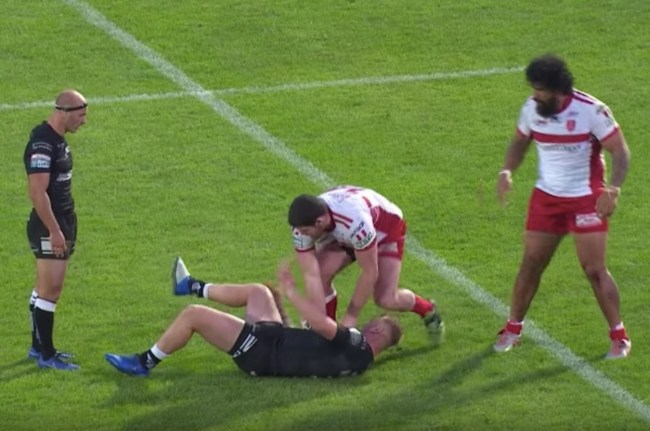 Rugby prides itself on being one of the most hardcore physical sports in the world. It has large elements of Football here in America with full-speed tackling only instead of being loaded up with protective pads and gear the players are often wearing nothing more than a uniform and cup.

I’ve never played Rugby myself. Partially because I’m very prone to injury (torn my meniscus twice, have dislocated my shoulder a handful of times, suffered 4 concussions) and partially because I just don’t have a lot of interest in running full speed down a field and getting demolished by a dude weight 240-pounds of pure muscle. That sounds like the opposite of fun to me.

But you didn’t come here today to hear about me not wanting to get pancaked in a Rugby match, you came here to see Hull FC’s Joe Westerman get taken down by two rival Hull KR players and have his knee dislocated.

Then, while Joe Westerman is on the ground and screaming in pain for the tacklers to get off him he just fucking slaps his dislocated kneecap back into place like some sort of savage beast you’d expect to meet on the Roman battlefield centuries ago.

“I looked at my leg and saw my knee cap on the side and I felt like I had to just smack it back in,” Westerman told the club website. “It wasn’t really an excruciating pain. It freaked me out more than anything because it looked so weird.”
“It’s sweet, to be honest,” Westerman said. “I expect to be training next week and I can’t really see myself missing our next game against St Helens next Friday.” (via)

I VIVIDLY remember this redheaded kid named Alex F. who dislocated his kneecap playing soccer during P.E. in 7th grade and I was standing right next to him when he looked down to see his kneecap sitting on the outside of his leg and the look of absolute horror on his face is burned in my mind forever. Which is pretty much the exact opposite of the reaction that Joe Westerman has here.

Westerman sees his dislocated knee and just slaps that shit back into place while the opposing players look on in amazement and then applaud his act of insanity. And there’s a part of me wondering how dangerous this was. What if he slapped it further out of place and fucked his knee up beyond repair? How likely was that scenario or in that situation do you know exactly where your kneecap needs to go and how to get it back into place?

According to SI’s Extra Mustard, Hull FC’s head coach Lee Radford said this is nothing new for Joe and that he ‘does that every fortnight’. The coach went on to suggest that Joe needs some more ligaments in there somewhere because whatever he has now isn’t doing the job.