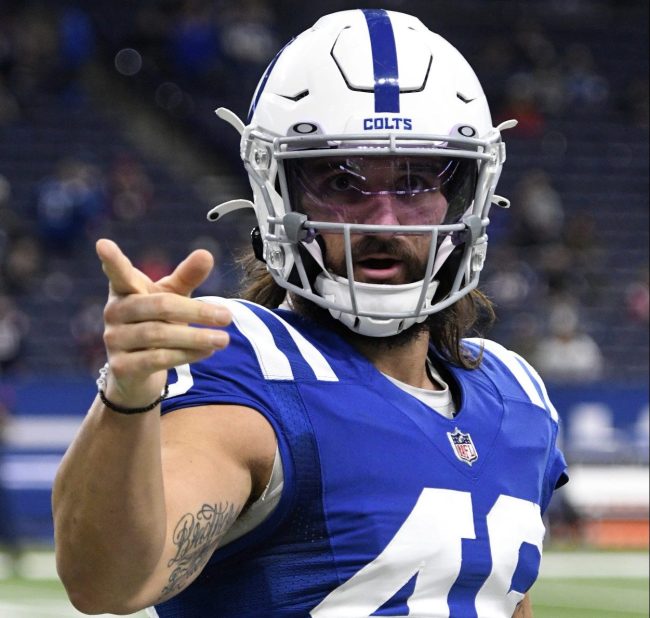 When it comes to professional football, there is no better gig than long snapping. 17 of 32 NFL long snappers make more than a million dollars in salary and on the low-end, the position pays at least $500,000. All to accurately snap a ball between your legs a few times a game.

While it sounds like a piece of cake, it is a lot harder than it looks. Only 32 of countless long snappers make the NFL, while every other position has at least two players on the roster. Think about that.

Thus, being named the league’s top long snapper is a huge honor. It is one that Colts snapper Luke Rhodes earlier this week.

The 29-year-old Pennsylvania-native played linebacker at William & Mary in college. He was an absolute monster.

Rhodes was a three-time first-team all-conference player and recorded 341 tackles. He was the only FCS player to be elected to the Butkus Award Watch List as a senior and played in the NFLPA Collegiate Bowl.

#51 LUKE RHODES is STARTING & was in on the 1st tackle of the 2016 NFLPA Collegiate Bowl! Tune in to ESPNews/ESPN 2 pic.twitter.com/aLDwSd426p

While those honors and numbers are impressive from the linebacker at William & Mary, it wasn’t quite enough to make it in the league. He went undrafted in 2016 and was cut by the Buccaneers as a part of final roster cuts.

After being picked up by the Colts, Rhodes found his calling as a long snapper. He is one of those “gamer types” and always on full go.

Now, five years later, he was selected as the AFC long snapper representative for this year’s Pro Bowl. It is well-deserved.

These 7⃣ are #ProBowl bound! pic.twitter.com/VDchOarUYK

While long snappers don’t typically have much of a “look” to them, Rhodes does. He rocks some flowing lettuce, a full beard, and is absolutely jacked.

Having played linebacker in college, Rhodes was always in the weight room. That trend did not stop after switching positions in the NFL.

He never, EVER, skips arm day.

Indianapolis Colts long snapper Luke Rhodes is headed to his first Pro Bowl for the AFC and has gargantuan arms pic.twitter.com/azlnFF8qnY

Maybe the trick to Rhodes’ success as a long snapper is all in the arms. It’s hard to imagine that any one of his NFL counterparts has the same muscle mass, which surely allows him to fire the ball between his legs with an unmatched force.