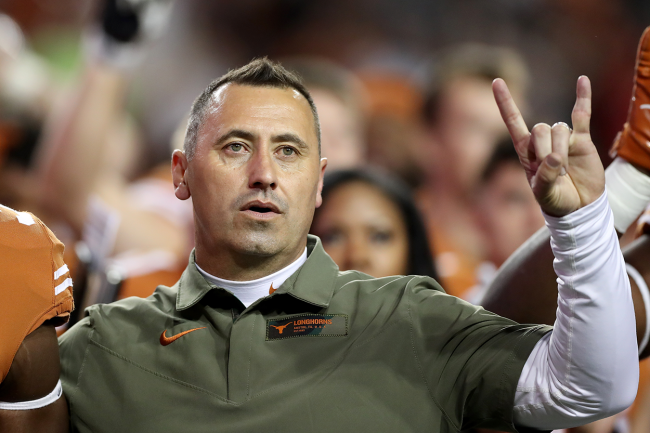 Texas football will (probably) not be going to a bowl game for the first time since Charlie Strong’s final year as head coach in 2016. After losing to West Virginia on Saturday, the Longhorns are 4-7 on the 2021 season with one game left. Six wins are necessary to reach a bowl.

There is the off chance that not enough teams on the FBS level reach bowl eligibility requirements and Texas could sneak in as an alternate, but those odds are slim. Barring the unlikely, Steve Sarkisian’s first year as head coach will come to a close after next weekend’s home game against Kansas State.

To make matters worse, the Longhorns just lost their sixth game in a row. The last time that Texas football suffered a six-game losing streak was in 1956.

It has been a disaster year for the team in Austin.

Throughout the season, ‘LOL Texas’ has trended on Twitter rather frequently, sad Texas fans were very sad, fans were threatening to fight the team’s defensive coordinator, and the school’s own recruits were laughing at the program. Meanwhile, boosters are allegedly pressuring Steve Sarkisian to play certain players based on their race, and the special teams coordinator’s stripper girlfriend’s emotional support monkey was biting trick-or-treaters.

In summation, it has been a terrible year for Texas football.

It is a great year for college football fans, and they did not hold back after the Longhorns’ loss to the Mountaineers on Saturday.

Here is what the internet had to say:

Remember when they were saying Texas is back like two months ago? https://t.co/p6tLSvx5da

Texas sucking is good for the soul.

Took them five years, but Texas is finally back https://t.co/HPz81qHh2y

I’m sure injuries play a factor, but hard to imagine how this Texas team boat-raced Texas Tech earlier this year

Every opposing coach to Texas’ Steve Sarkisian at halftime. pic.twitter.com/b7rnKbuj9O

Can Sark get tarmacked in only one season?😬😆

I’ve seen enough of this train wreck stuff for the last decade to know that what’s happening in Austin isn’t just first year struggles. If Texas starts seeing decommits flood in then you fire Sark and move on. They have the money to do it. Don’t let another 4 years pass.