Iowa Quarterback Spencer Petras Had A No Good, Very Bad Day In The Hawkeyes’ Narrow Win Over South Dakota State 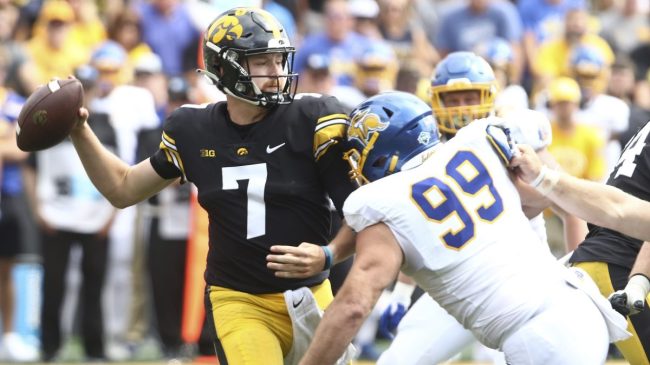 Week one of the 2022 college football season is officially in the books. For some, it was a week to remember. For others, not so much.

One of those others was the Iowa Hawkeyes.

The Hawkeyes had a miraculous start to the 2021 season, reaching as high at No. 2 in the AP Top 25. But Iowa’s offense eventually proved to be its undoing and the Hawkeyes went up 4-4 in its last eight games.

It appears that offense hasn’t gotten much better in the offseason. Kirk Ferentz’s team looked stuck in the mud for much of the afternoon on Saturday against FCS foe South Dakota State. Iowa eventually escaped with a 7-3 home victory thanks to a pair of safeties by its defense.

Spencer Petras started 12 games for the Hawkeyes a year ago but struggled in almost all of them. The then-junior threw for just 1,880 yards and 10 touchdowns to ago along with nine interceptions according to Sports Reference.

But that didn’t stop Ferentz from giving Petras the job again in 2022. Now he may want to rethink that idea.

The senior was absolutely abysmal against the Jackrabbits. Petras completed just 11 of his 25 passes for 109 yards, zero touchdowns and one interception.

That led to him posting an incredible 1.1 quarterback rating in the first week of the season. To nobody’s surprise, that’s the worst among all Big Ten quarterbacks in the opening week by far. No other quarterback in the Big Ten posted a rating below 50.

Rutgers even played three different quarterbacks on the first three plays of its game against Boston College. The Scarlet Knights still didn’t have a QB play as bad as Petras.

Ferentz seems ready to stick with his veteran signal caller through thick and thin (mostly thin).

Iowa’s Kirk Ferentz said that he doesn’t “anticipate any changes at this point” with Spencer Petras as the Hawkeyes’ starting quarterback. https://t.co/SwQv3P4KmP

There may not be enough beer in the entire state of Iowa for Hawkeyes fans to make it through 2022.