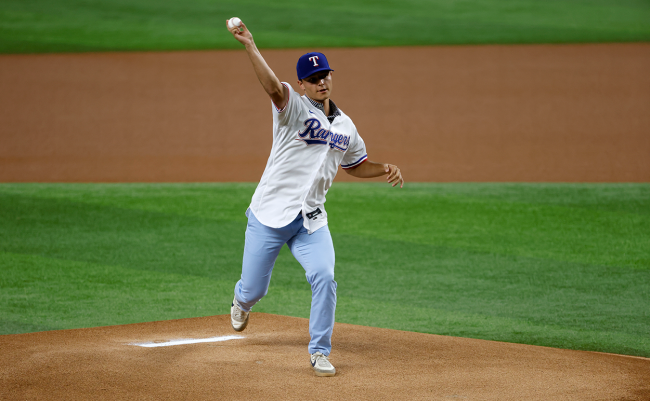 Jack Leiter is the No. 1 prospect in the Texas Rangers system and it is not hard to see why. The No. 2 overall draft pick in 2021 was a dominant force on the mound in college and continues to impress as he makes the transition to the Major League level.

In the first look of Leiter throwing to live batters at the Rangers’ team facility, he was pumping gas. And then, in a peek at what he looked throwing like in his new number prior to the end of the lockout, he was as-advertised.

Not long thereafter, he was striking out Ronald Acuña’s little brother with some stinky cheese and going viral for his nasty, slow-motion changeup. Since then, video emerged of Leiter throwing against Kansas City in a prospects game during spring training.

Would you like to see *all 10* of Jack Leiter's swings and misses today? Coming right up. #Rangers pic.twitter.com/eZgASF8tBA

And his cheddar looks even nastier in slow-motion.

Would you like to see Jack Leiter get a whiff in slow mo? I’d bet you would. Here you go. #Rangers pic.twitter.com/uWramDgsGb

Would you like *another* Jack Leiter whiff in slow-mo? You’ve got it. #Rangers pic.twitter.com/wuZCBiXbmf

Despite the small sample size and limited video clips, Leiter looks like he is going to develop into the certified ace that everyone expects him to become.

Although Leiter is on a fast-track to The Bigs, he is only 21 years old and this will be his first year on the professional level. He isn’t quite ready to go against MLB bats in regular season play just yet. As a result, he will begin his career in the minors.

The Rangers announced on Thursday that Leiter will start in Frisco, Texas on the AA level.

here’s the full rosters at all four levels pic.twitter.com/KMQ7X7lKCw

It is not impossible to imagine that Leiter could make his Major League debut this season. He could absolutely dominate out of the gates in AA ball, the Rangers could promote him to AAA early in the year and then choose to call him up when the rosters expand late in the summer.

However, more than likely, Leiter will spend this year working his way up from AA to AAA ball before getting to The Bigs next year or in 2024.