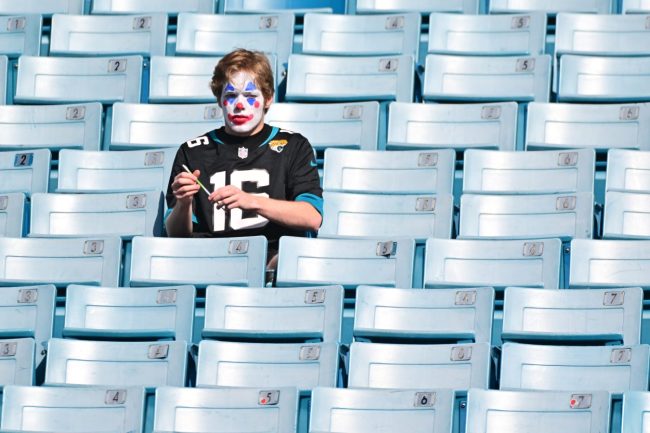 The Jaguars fanbase has simply had enough of the dysfunction within the organization. Not only is Jacksonville terrible in terms of wins and losses, but its coaching hires and roster management have been anything but impressive.

At the forefront of those failures is general manager Trent Baalke. The team is reportedly unable to find anyone to interview for its head coaching opening after firing Urban Meyer, and Baalke is the reason.

His reputation is poor around the league and nobody wants to work for him. And yet, despite Baalke’s incompetence, owner Shad Khan chose to keep him around, and the team is trying to bury any negativity pointed in his direction.

As a result of the turmoil, Jaguars fans want him fired and are making that very, very clear. They showed up in mass to Sunday’s game against the Colts and many of them dressed like clowns in protest.

It was hilarious, but a terrible look for Jacksonville.

Things got even worse, and funnier, during the first half.

A fan was invited to join an in-stadium announcer for a trivia game on the jumbotron and had a vicious way of burying the organization. The fan was given information about a former Jaguar player and was then asked to identify the corresponding player from a set of three choices.

However, she had a different idea. In response, the fan chose “C. Fire Baalke.”

The stadium erupted in laughter and cheers.

It’s hard to imagine a world where Baalke keeps his job, especially after getting buried during Sunday’s game. Brutal. Hilarious. Brutally hilarious.