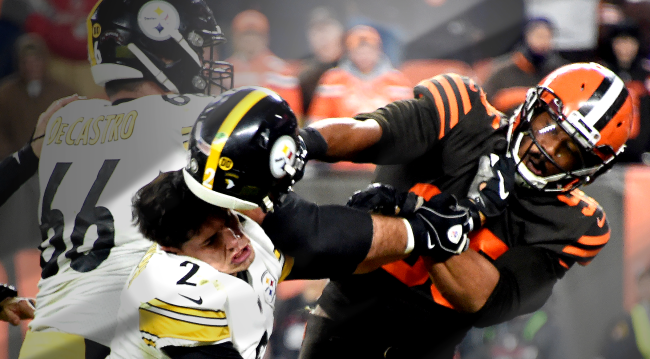 Last week, Cleveland Browns defensive end Myles Garrett was interviewed by Complex. During the conversation, Garrett was asked about his plans for life after football and the subject of boxing someone like Logan Paul was broached.

Garrett said that when he is done playing in the NFL he won’t be a commentator, but he does plan on playing a lot of video games and other sports like basketball.

Related: Myles Garrett Dunking On Some Poor Soul’s Head During A Game Of Pickup Basketball Is Not For The Faint Of Heart

“Once I’m done with football, I’m out. Maybe as a guest star for a big game,” said Garrett. “That might be fun. But I won’t be a Romo, none of that. A Howie Long. I’m good. I’ll do what I do now. I like playing video games, I like playing other sports. Might get me on a celebrity basketball game one time. You won’t get me into celebrity boxing. I think it’s foolish enough as it is. You’re not going to get me on that.”

That’s when the discussion turned to a potential boxing match with Logan Paul.

“I’d beat the brakes off of Logan Paul, but I have bigger fish to fry,” replied the 6-4, 275 pound Garrett. “I got a career to take care of. But I feel like I’d like to be like Jim Brown, like he expanded his whole avenues of where he was going and what he was doing. I’d liked to do voiceover work with certain shows that I’ve watched, like anime. That’d be real fun. Get into movies and TV shows, and find a way to just stay busy, as well as to entertain that historical and paleontological side in my brain that wants to go do things all over the world.”

On Monday, Logan’s brother Jake Paul was being interviewed by WKYC Channel 3 and they brought up Myles Garrett’s comments about his sibling.

“Stick to football, my friend,” Jake said, directing his comment towards Garrett.

“I like Myles. I have nothing against him, he’s an amazing player. But you saw what happened when Nate Robinson from the NBA tried to step into the ring. People don’t realize it’s a whole different sport.”

Jake knocked out Robinson during their boxing match on the Mike Tyson – Roy Jones Jr. undercard.

“My brother sparred against all of the Gronkowski brothers, who are 6’5″, 6’6″, 6’7″ and he took them all down in the same sparring session,” Jake added.

“People don’t realize this is a sport where time and experience is really the only thing that gets you better. So long story short, my brother would knock him out, no question. But nothing against Myles.”

“He’s an absolute beast. Whatever that dude does, he’s good at,” Miocic told TMZ Sports about working out with Garrett.