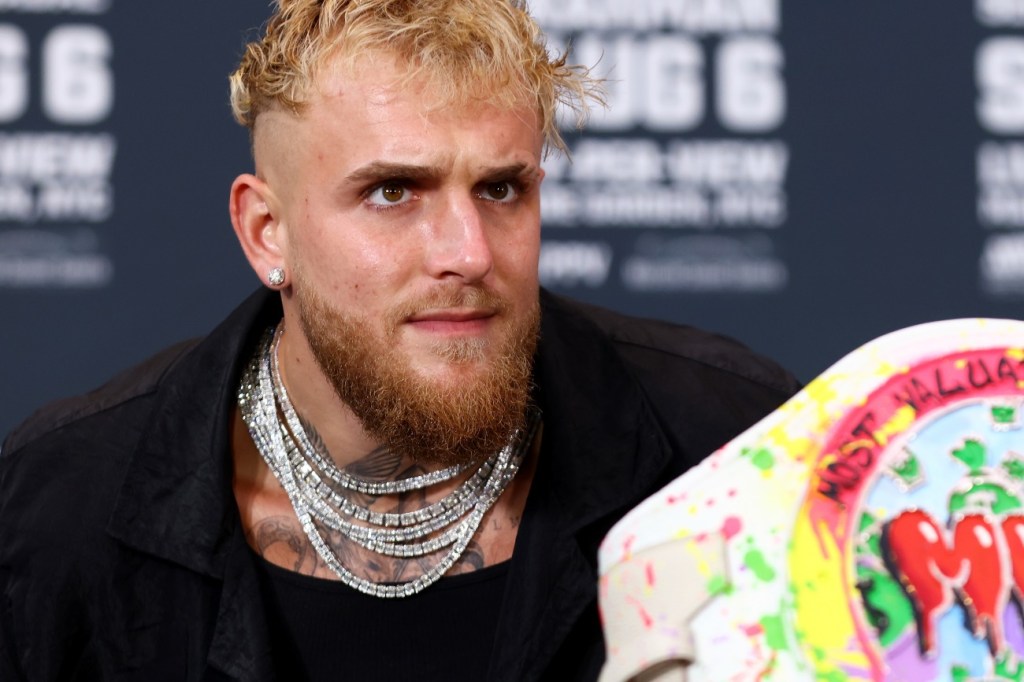 Jake Paul is all set to fight Hasim Rahman Jr. at Madison Square Garden on August 6th. He briefly scared fans on Monday when he posted a video from a hospital bed in which he claimed to break his back but what seemed like a somber video quickly turned into a WWE-style promo for the younger Paul brother.

After saying he broke his back, Jake Paul went on to claim it was from carrying all of the promo for his upcoming Madison Square Garden fight against Hasim Rahman Jr. on August 6th. Jake Paul was previously set to fight Tommy Fury who his a huge PPV draw but Fury being unable to leave the UK has left a big question mark over the potential PPV numbers.

Had a little accident but will still be able to fight August 6th. Get your tickets 👉🏼 https://t.co/j4OvSRYRxA pic.twitter.com/6YBbpHTk8K

And Jake says he’s using his doubters to work harder. This tweet looks like something you’d expect to see from Gary Vee. It’s such a comically try hard tweet that I actually kind of love it.

Thank you for doubting me. It makes me work that much harder.

Knockout jr for all the jake paulers😤

As a boxing expert I can confidently say that Jake Paul is the number 1 in boxing right now. Now I know there are some great boxers, but it’s quite obvious no one is on Jakes level, and in 3-4 years time Jake Paul will be fighting for a world championship.

Will this fight draw in a big PPV crowd or no?

These PPV numbers aren’t confirmed, but previously the Jake Paul vs. Deji PPV fight was said to draw in 700K PPV viewers (not buyers). His fight versus Nate Robinson reportedly brought in 1.2M PPV purchases according to a BJPenn tweet. Front Office Sports reported 1.5 million pay-per-view purchases for Jake Paul vs. Ben Askren. And his first fight against Tyron Woodley reportedly brought in 500K PPV buys.

A quick look at TicketMaster shows there are thousands of tickets still available to Jake Paul’s fight against Hasim Rahman Jr. and that doesn’t bode well. If he can’t sell out Madison Square Garden where hundreds of tickets are selling for just $56, how can he bank on big PPV numbers?

Is Jake Paul going to win his fight against Hasim Rahman Jr.? Probably.

A little while back, Joe Rogan had an interesting discussion on how Jake Paul will fare against a seasoned top-tier boxer. The boxing world certainly belives Jake can hold his own. Here’s that clip:

Joe Rogan: “Entertain this perspective, if Jake Paul wasn’t Jake Paul, if he wasn’t this YouTube guy and he was just a boxer, and you see a boxer knock out the former UFC welterweight champion. And not just ‘the former’ but one of the best ever, and knock him out with one punch like that. Like ‘oh man, have you seen this Jake Paul dude coming up? He’s f–king for real.’

Because nothing about watching him fight to me screams like he’s in over his head, nothing. He looks like a real boxer. He looks like a real boxer, he doesn’t look like a guy who’s attempting boxing. That’s the difference. The feints, the foot movement, the way he lands shots. He fights like a boxer, he doesn’t fight like a guy who is trying to box in a celebrity boxing match.

Radio Rahim: “Okay so there’s two points to be made here. First of all, if a guy in his pro debut and in the first five fights of his career is knocking out people whose names we know. You are absolutely right. That person is going to get a huge amount of attention and everybody’s going to be like ‘wow, who the f–k is this guy?’

But also, a guy who is on the track to be somebody who has like potential from the Olympics or has a great amateur record and we’re going to turn this guy into somebody. In their first fights, they’re fighting guys who are like 5-and-27. They aren’t fighting other debut opponents who don’t have a great trajectory in front of them. They’re fighting tomato cans, bums, just completely not competitive opponents and that’s fine.

So when we expect a Jake Paul to be fighting higher level competition it’s not because he has under 10 fights it’s because he talks A LOT of s–t.”

Joe Rogan: “Yes but that’s also why we’re talking about him.”

Radio Rahim: “And that’s exactly true but I think on both sides of the equation we’ve got to admit that a young fighter under five fights isn’t fighting great competition. So if you’re calling Jake Paul a legitimate boxer and then expecting him to do what legitimate boxers do I’m not sure he’s not doing that and probably more.”

Joe Rogan: “That’s what I’m saying about the knockout of Tyron Woodley. If there was just a regular boxer who was coming up… And what does he have, six fights? Five fights? Something like that right. (Rogan checking the actual number of fights…) Now anybody who had just five fights was like doing small cards and then knocks out Tyron Woodley… Tyron Woodley says ‘I’m going to try Boxing’ and then some guy starches him with one punch and talks mad s–t, (I’d be like) ‘wow that guy’s hot.'”

Radio Rahim: “Right, but a 5-0 fighter who has knocked out five guys isn’t saying ‘I’m ready for Canelo.’ Like no guy …

But you do if you’re crazy and you just talk a lot of s–t. It’s not like Canelo is waiting to fight him. Canelo’s got a lot of things he’s doing. He doesn’t have any time to be waiting around on Jake Paul. He’s not really going to fight him. He’s going to fight Golovkin in the rematch if he beats Bivol, he’s got things lined up.”

Jake Paul is currently -225 while Hasim Rahman Jr. is +175 in their fight (+1600 draw). If those numbers are gibberish to you, check out our complete guide of how to understand betting odds and get started.