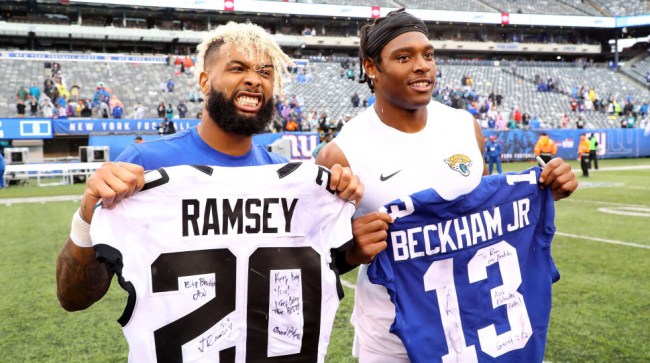 Jalen Ramsey has absolutely zero problem dishing out criticism of other NFL players, but when fans direct some (pretty accurate) criticism at him, he gets more than a little salty.

Ramsey said about Danny Amendola, “He just got a brand-new contract and he is terrible.”

This was after he also obliterated most of the quarterbacks in the NFL, including Eli Manning, Ben Roethlisberger and more.

• Josh Allen: “I think Allen is trash. I don’t care what nobody say. He’s trash.”

• Joe Flacco: “Flacco sucks. I played him two years in a row. He sucks.”

On Sunday, Manning didn’t throw for any touchdowns, but his assessment of OBJ seemed pretty accurate as he went off with 11 catches for 111 yards. And, unofficially, six of those catches for 87 yards were head-to-head with Ramsey.

All eyes were on the @obj vs. @jalenramsey matchup.

Apparently, all of those catches and yards were not Ramsey’s fault however, as he seemed to have rabbit ears with regard to NFL fans’ critique of the game.

To all the “fans” that feel so-called mad you didn’t see enough of “the matchup”, maybe you should be a fan of another sport because football is played 11on11 not 1on1 all game! God bless 🙏🏾

Of course, Twitter being Twitter (just ask Aaron Rodgers), everyone and their brother then proceeded to troll him.

Yet you talked all off-season like it was ONE v ONE. Stop backtracking you got absolutely cooked by OBJ.

Pretty sure you opened that can of worms

Odell had you on skates

Turned that boi around 💯😂 pic.twitter.com/zDcFjNDYKU

On the plus side for Ramsey, he was pretty spot-on with his takes on those quarterbacks, at least on Sunday as Roethlisberger, Allen, and Ryan did nothing special and/or were bad. Joe Flacco, however? Elite.

THAT'S WHAT HE DOES.