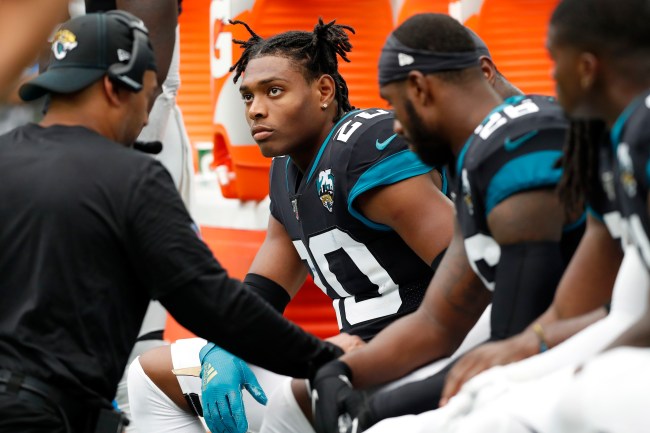 Jalen Ramsey has made it more than clear that he’s looking for any way to get out of Jacksonville, officially requesting a trade earlier this week. The Jaguars’ star cornerback — who was selected fifth overall in 2016 and already showed displeasure with the franchise after it decided not to extend him this past offseason — even appeared in an awkward press conference the other day in the midst of all this drama, candidly speaking his mind on the matter.

After getting in a shoving match with head coach Doug Marrone during last week’s loss to the Houston Texans, it’s clear to Jalen Ramsey’s days as a member of the Jags is probably over; it’s just a matter of when and where the talented defensive back ends up.

While Ramsey may get moved sooner rather than later, if he does happen to get traded in the day or two after the Thursday Night Football game that features the Jags and Tennessee Titans, any team that gets him will need to keep him on the sideline, with one team even being told by the league that they couldn’t acquire Ramsey and suit him up this Sunday after already playing Thursday night. That’s according to ESPN’s Adam Schefter, who said one team at least had the balls to ask the NFL about the possibility.

At the beginning of this week, an NFL team reached out to the league office and asked whether Jalen Ramsey could play Sunday for that team after he played Thursday for the Jaguars, per source. League informed the team no, that it’s one game per player per week.

Hey, not a bold move, right? I mean, if you’re trading for a guy before your team’s game, you might as well be able to play him, right? Who gives a damn if he had previously played a game that week already.

Unfortunately, due to NFL rules, Jalen Ramsey isn’t allowed to suit up for two different teams in the same week, so, even if he does get traded from the Jags tomorrow or Saturday — before Sunday or Monday’s Week 3 matchups — he’ll be nothing more than a spectator. However, it would’ve been pretty awesome if this league rule wasn’t in place and we could really see how freakishly athletic Ramsey really is, and if he would be capable of playing two meaningful games in such a short time frame.

What if #Jaguars CB Jalen Ramsey plays tomorrow, then gets traded… can he play Sunday or Monday? Nope, per NFL rules: No player may be on a club’s 46-player Active List for more than one game per week.

Jalen Ramsey is expected to play in the Thursday night game, but, if he doesn’t for some reason, then he would be eligible should he get traded before this weekend and his new team wants to play him. Either way, let’s hope all this dysfunction between him and the Jags ends soon and he gets his wish to be traded somewhere.