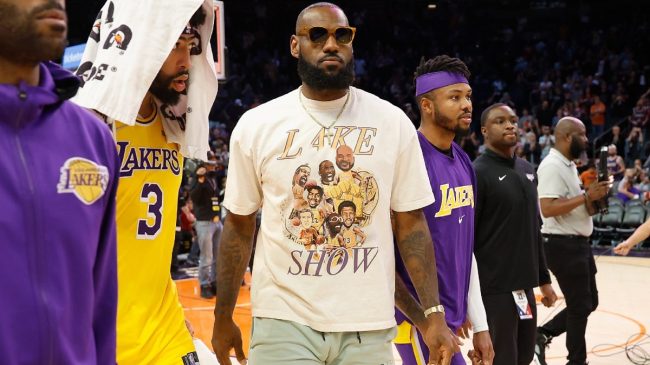 The Los Angeles Lakers were obviously a disappointment this season.

Originally considered an NBA championship contender, LA limped to a 33-49 overall record. That mark was only good enough for an 11th placed finish in the Western Conference, leaving the Lakers on the outside looking in come playoff time.

While some benefitted from the struggles, we can all agree that the postseason is better when Los Angeles is involved.

There were a variety of issues that led to the poor performance. While LeBron James played up to his typical All-Star expectation, his supporting cast let him down.

Anthony Davis was often injured, which has become a theme over his time in LA. New addition Russell Westbrook experienced highs and lows, with his on-the-court inconsistencies leading to criticism.

In the end, LeBron couldn’t do it all.

But with the superstar growing another year older, and the team in a position to potentially begin a rebuild, some are wondering if this should be the end of the line for James in Los Angeles.

Stephen A. Smith says the Lakers should trade LeBron James

Stephen A. Smith said that the Lakers should seriously consider dealing LeBron James this offseason. He states that he is the only player on the roster that offers trade value.

“I think the Lakers should seriously consider trading LeBron James… The Los Angeles Lakers as presently constructed are going nowhere. Russell Westbrook clearly lost something… You can’t get but so much value for Anthony Davis because he’s perpetually injured… [LeBron] is the only person that has extreme value.”

While many agree that Los Angeles could see a huge return on a deal for James, one sports host counters that line of thinking.

.@JalenRose weighs in on @stephenasmith's opinion that the Lakers should trade LeBron 👀

"You can't do that if you're the Lakers! … That's almost like trading Kobe Bryant in the years that they didn't make the playoffs." pic.twitter.com/dqBnas1JmJ

“You can’t do that if you the Lakers. That’s almost like trading Kobe Bryant!”

Rose knows that James is the face of the franchise, and his presence is what puts butts in the seats. Instead, he offers a second option for Los Angeles.

“That’s truly the Lakers’ problem. That AD can’t stay healthy during the regular season and carry it until LeBron gets ready for the playoffs.”

Rather than trade their best player and begin a rebuild, the Lakers should try to add more around him by getting rid of Davis. While the big man wouldn’t get the value that he may have garnered a few seasons ago, teams would certainly be interested in listening to offers.

It seems unlikely that LA will deal James this offseason. We’ll see whether Davis is on the chopping block this summer or if the Lakers decide to stand pat.