James Corden Absolutely Buries The Super League, Labels It The Death Of Soccer 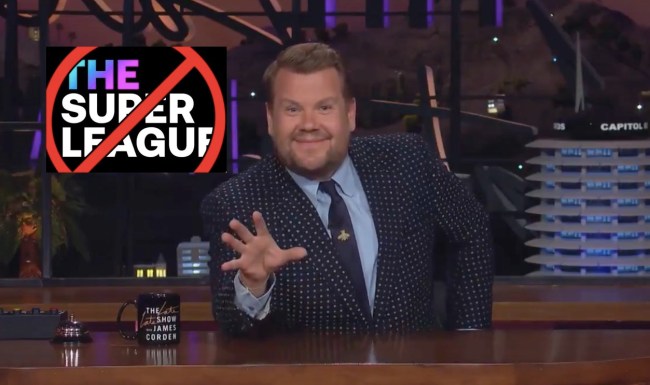 Unless you’ve been living under a rock this last week — if so, awesome, where’s my invite? — you’ve probably heard about The Super League.

The reaction from the football world has been almost uniform, as fans, players, managers, and pundits alike have all made it clear that they’re vehemently against the idea. The Late Late Show host James Corden added his name to that growing list of Super League naysayers, as he used six minutes of his opening monologue on Monday night to discuss the league and why it’s so detrimental to the game. Corden even went as far as saying it’s the end of the sport as we know it.

"It's the end of the sport we love. It truly is." pic.twitter.com/IOZW8zMjRD

RELATED: How One Of America’s Biggest Banks Finds Itself At The Heart Of European Soccer’s Mutiny

Despite being announced just two days ago, The Super League is already embroiled in tons of controversy, with some reports even indicating that two Premier League clubs — reportedly Chelsea and Manchester City — are prepared to back out of the league.

Fans have also taken up immediate arms against The Super League, as yesterday’s Liverpool-Leeds United match was crashed by pregame protestors.

Boos and chants of ‘scum’ as the #LFC team coach arrives at Elland Road pic.twitter.com/3O4txDdCVy

Fans certainly aren’t alone in their anger, as players and managers of these various clubs have also spoken out against the decision. Following their 1-1 draw against Leeds United, both Liverpool manager Jurgen Klopp and vice-captain James Milner spoke out against the formation of The Super League and reiterated that they don’t want it to happen.

“I don’t like it and I hope it doesn’t happen,” Milner told Sky Sports.

“In the city when we had a walk this afternoon people were shouting at us. We are employees of the club. I am responsible for a lot of things and when I am involved in things I take the criticism easily, but we are not involved in this,” Klopp said.

With The Super League powers-that-be intent on beginning play as soon as possible, this saga is only going to get uglier before it gets resolved. Buckle up.