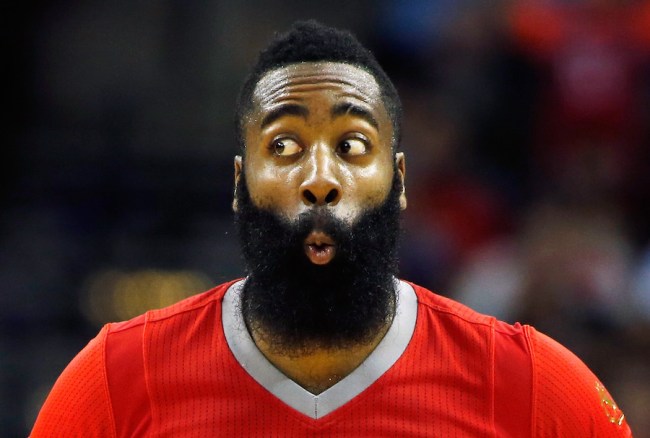 The Houston Rockets and James Harden have been in the news more frequently this offseason than any other NBA team.

Earlier this month, Harden turned down a $50M contract extension and asked to be traded to the Brooklyn Nets and posted weirdly cryptic messages on Instagram. Harden allegedly wasn’t too fond of Rockets’ owner Tilman Fertitta openly supporting Donald Trump.

Rumors spread about Harden being dealt to Philadelphia, or possibly Boston, but the team instead traded Russell Westbrook to the Washington Wizards for John Wall in an effort to keep Harden happy.

This week, the Rockets began individual workouts this week and have their first official practice on Sunday. While the workouts aren’t mandatory, Harden has been a no-show.

According to a TMZ article, Harden was in Atlanta at some point this week to celebrate Lil Baby’s birthday. Harden gifted his buddy a $300K bag full of treats, which included a designer watch.

Lil Baby turned 26 this week — and to celebrate, his good pal, James, turned up with a designer Prada bag loaded with goodies.

“Prada bag ’cause he Prouda’ me,” Baby said of Harden’s gift.

(Get it, honey bun — like a bundle of hundreds?)

There’s more … Baby also pulled out a Richard Mille watch, which appears to come with a $200,000 price tag.

TMZ reports that Harden and Lil Baby “have been friends for a while” and recently vacationing together with other friends on Turks & Caicos.

John Wall is hopefully rubbing his hands together, waiting for his “Welcome to Houston” swag bag from Harden.