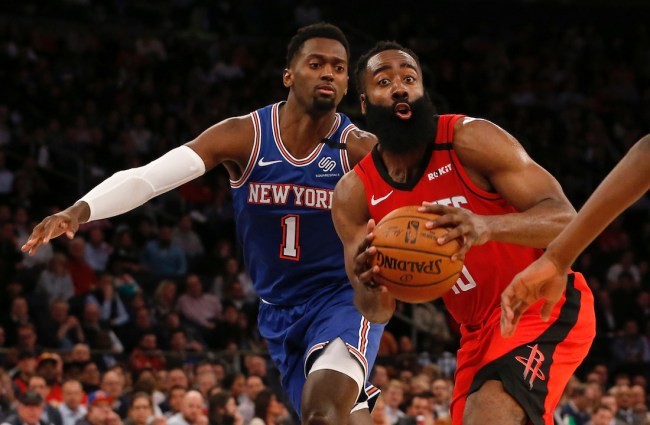 Another day, another James Harden report, with the former NBA MVP reportedly taking even more shots at the Houston Rockets prior to the new NBA season kicking off. For those out of the loop, things are tense between the franchise and its superstar, with Harden reportedly trying to force his way to the Brooklyn Nets to play with Kevin Durant and Kyrie Irving. It’s a rumor that has been floating around for the past month, but, as of now, there’s no ending to this current standoff.

However, a recent report clams that Harden is so disgruntled with the Rockets that he refers to them in his inner circle as the “Knicks of the south,” which, of course, is a reference to the dysfunctional New York Knicks. Those would be the same Knicks that haven’t reached the postseason since 2012-13 and have an owner, James Dolan, who is regarded as one of the worst in all of sports. Hell, the dude has fought former players, allegedly tried to blackball Spike Lee, and even kicked out fans for booing him and suggesting he sells the team. So, yeah, the reported dig by James Harden is a major knock on the Rockets.

“Some news: A person familiar with James Harden’s thinking described the Rockets’ culture as toxic and called them the ‘Knicks of the South,’” tweeted Sports Illustrated’s Rohan Nadkarni.

“I’m not sure it’s in Houston’s best interests to drag this situation out. Harden is under contract, but stars take notice of how other stars are treated around the league. That’s the game now.”

Whether the report is true or not, given all the changes that have happened in Houston over the past few months, it makes you wonder if it’s truly how James Harden views the team now. Gone is Mike D’Antoni. Daryl Morey, the longtime GM, left for the Philadelphia 76ers. The front office seems to be recycling All-Stars each year to play alongside Harden in hopes of making one attempt successful, with Chris Paul and Russell Westbrook both failing, and John Wall now getting his turn this season should Houston retain Harden. Add in the rumors about Harden’s unhappiness with team owner Tilman Fertitta’s support of President Trump, and, well, this seems like a divorce destined to happen.

Who knows what happens at this point between Harden and the Rockets, but the writing appears to be on the wall, and it doesn’t seem like the relationship is can be salvaged. From James Harden’s mom suggesting the superstar wants out on social media, to the player choosing partying over training camp with his teammates, it seems like Harden is doing everything he can to force his way out — and comparing the Rockets to the Knicks might be the most damning blow yet.