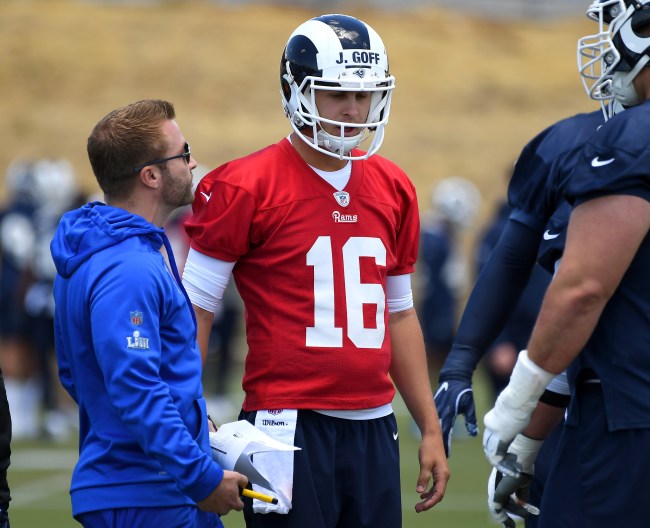 Jared Goff is coming off a 2018 season in which he tossed 32 touchdowns, just 12 interceptions, threw for almost 4,700 yards, made the Pro Bowl and led the Los Angeles Rams to the Super Bowl, so it’s safe to say the former No. 1 overall pick is sort of good at this whole quarterback thing. While Goff did struggle in his rookie campaign, since being under the tutelage of head coach Sean McVay, the signal-caller’s gone to two-straight Pro Bowls and has a touchdown-to-interception ratio of 60-19 — but there’s at least one well-known analyst who isn’t convinced Jared Goff is McVay’s guy long-term.

That guy analyst would be Mike Florio of Pro Football Talk, who spoke to Dan Patrick the other day and actually said he could see the Rams refuse to give Jared Goff a second contract once his current contract, his rookie deal, expires after the 2020 season. When asked by Patrick which quarterback he would feel more comfortable giving a franchise contract to, Dak Prescott or Goff, here’s what Florio had to say.

“Oh, Dak Prescott without question. I’m very skeptical about Jared Goff, and I would not be surprised if he doesn’t get a second contract with the Rams.”

“I think there’s a chance that [Rams Head Coach] Sean McVay at some point is going to find his own guy. Remember, he inherited Jared Goff. There may be somebody that McVay is eyeing at some point to come in and be that long-term guy, because you gotta ask yourself, ‘Am I willing to commit $35m a year to Jared Goff? Or could I find a younger guy who I get a lot cheaper and put pieces around him?’

“That’s the biggest problem now. You have those early years with a young quarterback where he’s dirt cheap under the rookie wage scale. And then you have to ask yourself, ‘Do we pay huge money?’ Eventually, somebody’s going to say, ‘We’re just not going to pay the huge money. We’ll go find somebody else.'”

Mike Florio is well-respected and connected within NFL circles, but this take seems outrageous. Prescott manages the game well and has proven that, as a former fourth-round pick a couple of years ago, he’s an above-average starter in the league. But Jared Goff has led his team to two-straight playoff appearances, which includes the most recent Super Bowl, so to think that the Rams would try to go cheaper and give McVay “his own guy” just seems insane given his success with Goff under center.

Sure, McVay’s a supposed “quarterback whisperer” and football guru who has turned everything he’s touched into gold, but why fix something that’s not broken? Of course, Florio’s speaking about Jared Goff at this moment, and, who knows what might happen with him in the next couple of years before his current contract runs out? If he regresses, OK, this take makes sense. But, right now, there’s no way in hell Dak Prescott has proven himself more than Goff has.