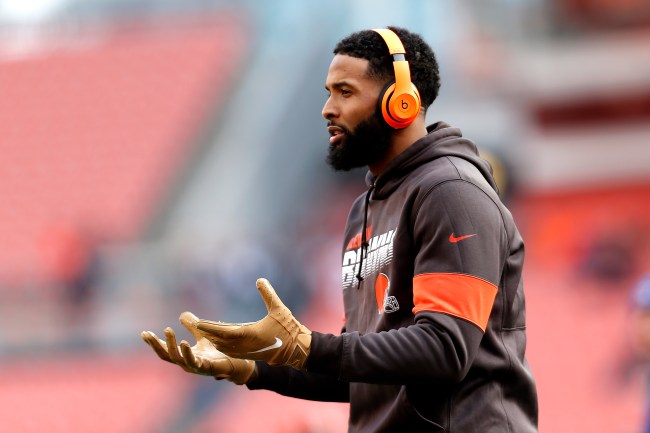 Jason Whitlock has had some hot takes in his time on TV, but the one he recently gave about Cleveland Browns wide receiver Odell Beckham Jr. has to be one of the most scorching opinions about the three-time Pro Bowl wideout. In fact, Whitlock went so far in on OBJ, that he pretty much put his entire NFL career to this point in a bodybag, disregarding some of the things he’s done — other than a few spectacular catches.

While on his show Speak For Yourself, Jason Whitlock described Beckham Jr. as somebody who isn’t as dedicated to football as many may think, while adding that he’s overpriced and doesn’t bring anything to a winning football environment. Take a look at the full rant from the FS1 personality below.

"I think for teams who are interested in winning and winning right now, OBJ has very little value."#SFYin60 pic.twitter.com/cR6jbhK4HT

“I think for teams that are interested in winning and winning right now, Odell Beckham Jr. has very little value,” Whitlock said on FOX Sports 1. “Odell Beckham Jr.’s not all in on football. He costs too much money, he’s not as great a player as everyone’s made him out to be. He’s benefitted from a league that has gone soft. He’s undersized, he’s got a big mouth. He makes some spectacular catches, but he doesn’t contribute to a winning environment.

“I think teams are going to be more hesitant to get involved with those guys and Odell Beckham Jr., to me, is exhibit A, B, C and O, B and J. He is the prime example of a guy you don’t want anywhere near your football team if you’re trying to win a championship.”

To say Whitlock isn’t a fan of Beckham’s at this point seems to be a major understatement. Not sure if the TV host truly feels this way, is just trying to make a splashy soundbite, or if he just woke up on the wrong side of the bed this morning, but it doesn’t do any favors for OBJ, whose name did pop up in trade rumors both during last season and early this NFL offseason.

Although the FS1 personality fired off major shots with his words, it seems like some on Twitter agreed with the criticism. Just look at what fans were saying on social media.

No one wants to have to babysit a player during the season.

To much of a headache for a coaching staff

Spot on, as always, good sir👍🏼

Another Pre-Madonna WR who will wash out of the league while he can still play.

After microphones allegedly caught Beckham Jr. telling opposing players to “come get me” during another dreadful season for the Browns, the wideout has continued to draw headlines for things other than his play. While the receiver did suit up in all 16 games last season despite a hip injury, he was unproductive and seemed isolated during his first season in Cleveland. Maybe the harsh criticism from Jason Whitlock will light a fire under him to step up his game this offseason and next season to prove doubters wrong — which is the best thing fans in the Dawg Pound can hope for.