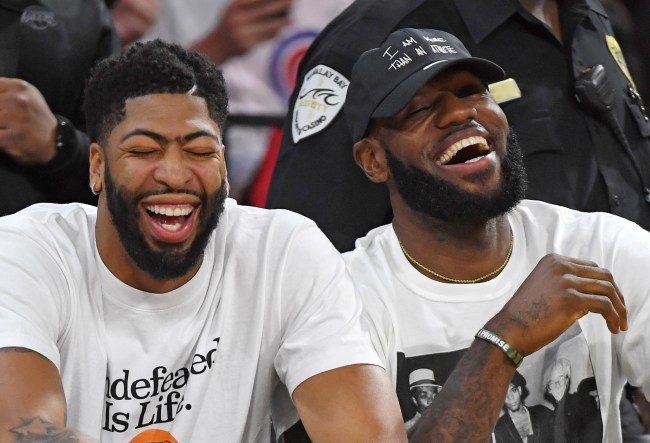 Jason Whitlock sure knows how to make a splash on an otherwise slow news cycle on a Friday morning, doesn’t he? The FS1 talent has always been good at drawing attention to himself — whether for his questionable hair plugs or his steaming hot takes — but he really outdid himself with a suggestion made on Speak for Yourself.

As we all know, the NBA Trade Deadline just passed, and, while it was pretty wild to see some of the movement — looking at you, Warriors and Timberwolves — there was one trade that happened that a few fans may not have really paid much attention to. That would be Marcus Morris going from the New York Knicks to the Los Angeles Clippers, which gives even more depth to a Clips team stacked with it, while also adding a solid defender and bulk scorer.

Here’s the thing about that trade that some may not have known, though: The Clippers were going mano a mano with their in-city rivals, the Lakers, for Marcus Morris’ services, which only added to the drama between the two franchises.

According to sources, the Lakers weren’t interested in trading the young Kyle Kuzma for Morris, which is why they balked. That’s per The Ringer’s Kevin O’Connor, who tweeted out the details below.

There isn't a single logical reason for the Lakers to trade Kyle Kuzma and Danny Green for just Marcus Morris lol https://t.co/w9YCjDDIQ6

Now this is where Jason Whitlock comes in, because, in his mind, the Lakers missing out on Marcus Morris could signal trouble ahead, with the TV talent actually proclaiming that it could lead to losing both LeBron James and Anthony Davis. No, that’s not a joke. Yes, it’s something a man involved in sports media for about 20 years just said on national TV. Take a look below at the hottest of takes.

I don't think I've laughed this hard in a long time.

Suggesting AD & LeBron may want out because they didn't get Marcus Morris…. pic.twitter.com/81an26GFpe

Is Jason Whitlock drinking on the job, or is this really something he believes? Maybe he was playing backyard football with Antonio Brown and hit his head or something, because this makes about as most sense as, well, anything that AB’s done in the past 12 months or so.

Sure, Davis is an unrestricted free agent this summer and can walk wherever he wants to, but James is locked in for at least one more year (and has a fourth-year option), so it’s hard to imagine him demanding a trade from the Lakers. Even in the darkest and most dysfunctional times last season with the team — and all those years in Cleveland — James has never demanded a trade, so not sure what universe Whitlock’s imagining this scenario going down, but it can’t be planet earth.

As you could already guess, once Whitlock’s take hit the Interwebs, it was free game for people to rip him apart.

I don’t understand why he is on tv. At least skip is halfway entertaining. This dude is just dumb.

Who wakes up and legit thinks this way lol

Saying the BS with a straight face, absolute joke!

Mad respect to Jason Whitlock for suggesting something this boiling hot, but nobody should expect that the Lakers not trading for Marcus Morris will be the final straw for LeBron James and Anthony Davis to demand out. I get Whitlock wants eyeballs every day, but there are way smarter ways to achieve that than saying this nonsense.