Jayson Tatum Begged LeBron For A Follow Back On Twitter When He Was 14, Now They Are Squaring Off In The Conference Finals 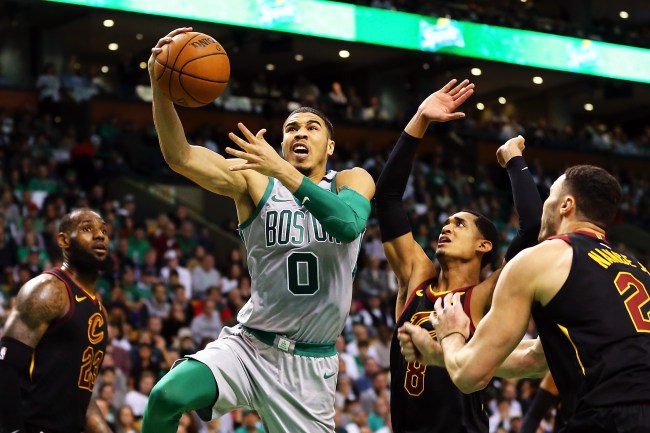 If the Celtics beat the Cavaliers to advance to the NBA Finals, Jayson Tatum will not even be legally old enough to drink the champagne in the locker room. At 20 years old, he is one of the youngest players in the league. For perspective, Vince Carter was drafted by the Raptors the year Tatum was born. Carter is currently 41 and still in the league.

Tatum marks the new wave of NBA players that didn’t grow up witnessing Michael Jordan’s greatness (he was only alive for MJ’s ‘meh’ Wizards days). Tatum’s passion for the game was molded by players like LeBron James, the same LeBron James that he’ll be squaring off against on one of the NBA’s biggest stages come Sunday.

Just six years ago, when the C’s young star was just 14, he was just a LeBron fanboy begging for a follow back.

@KingJames Follow back it's Larry Hughes nephew from st. Louis and Abe and Rj Lil cousin and Justin Son Follow Back pic.twitter.com/AnOnb7E8

According to Jay King of MassLive:

“I was like in fourth grade when I took that photo,” Tatum said. “And I was like nine or 10. I remember after the game, I took a picture of him. And then I guess five years ago I tweeted it trying to get a follow back.”

Flash forward to today, Tatum is undoubtedly on LBJ’s radar, scoring at least 20 points in each of Boston’s last seven games, topped off by  a 25-point performance in the C’s series-clinching Game 5 win over the 76ers on Wednesday night.