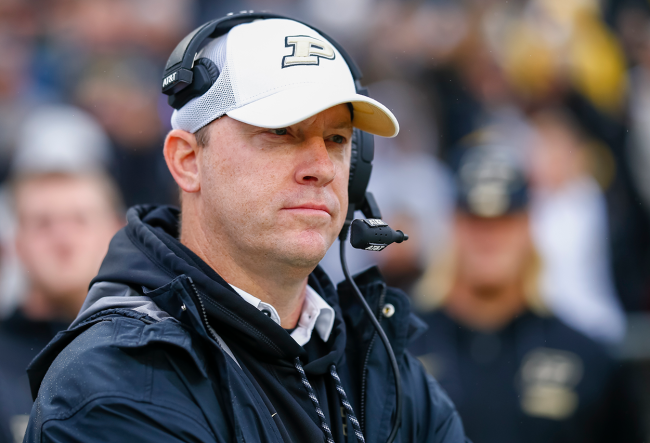 And yet, he’s currently the head football coach at Purdue.

Brohm received his first head coaching job in 2014 with Western Kentucky and became a national name while leading the Hilltoppers to three-straight bowl games and two 10+ win seasons. After going 30-10 in Bowling Green, the rising star in the coaching world was one of the biggest names on the market during the 2017 cycle and he left for the same job with the Boilermakers.

Over the course of his five years with the team, he has found varied success. Purdue is a hard place to win, but Brohm’s Boilermakers have been a spoiler in recent years and are coming off of their first nine-win season since 2003.

Despite the recent triumphs, Brohm does not appear to have closed the door on a return to Louisville. He will forever be connected to the Cardinals, whether they are winning or not.

At the moment, the team is coached by Scott Satterfield. He was named ACC coach of the year in his first season, but has gone 18-19 in three years, so his seat is slightly hotter than lukewarm. It’s slowly heating up.

According to WDRB, during a recent appearance in Louisville during which he spoke to more than 100 members of the Louisville Flaget High School alumni association, Brohm was asked the question almost immediately after he opened up the floor for questions.

“How much pressure did you feel when the Louisville job opened in (2018)?”

In response, Brohm may have been pandering to a local crowd. Maybe not. Either way, it’s hard not to read into what he said about the possibility of coaching at his alma mater.

“OK, those are all good questions on the Louisville job,” Brohm said. “You know what … after being at Purdue two years when it came open, that was a tough call. Tough call.

“To be quite honest, through my schooling and how I was raised, I believe in at least trying to do the right thing and having morals and values. It just was too early to leave (Purdue for U of L then). It just wasn’t right.

“You build relationships. People treat you right. The people there have treated me great. You talk to recruits and they asked me things. Just a lot of things went into it.

“But, obviously, now we’re on year six. I love this town, this area. I’m an alumnus of Louisville. So anything can happen in the future.”

If Satterfield wins in 2022, there isn’t a conversation to be had. If not, Louisville administrators will likely always have the thought of Brohm in their back of their heads.