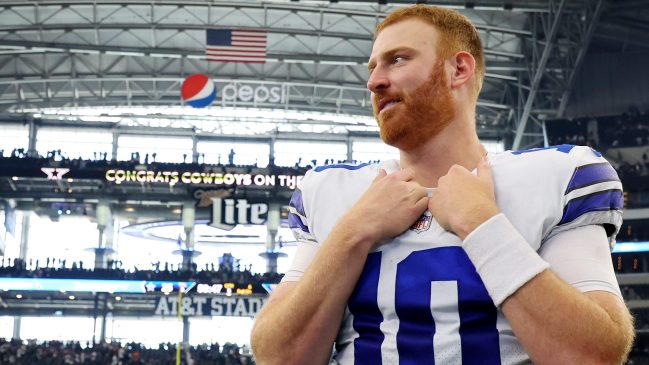 The Dallas Cowboys are 3-0 under backup quarterback Cooper Rush and have seemingly revitalized their season after an embarrassing Week 1 showing against the Tampa Bay Buccaneers.

Starting quarterback Dak Prescott went just 14-of-29 for 134 yards, zero touchdowns and one interception in the 19-3 loss to Tampa Bay. He also broke his thumb in the process, an injury that some felt could cost him up to eight weeks.

Prescott has healed quicker than most expected. But the solid play of Rush and some curious comments from Cowboys owner Jerry Jones had some fans wondering if they’d even bring back their star signal caller.

Rush has been solid statistically. But it’s the win-loss column that has some fans clamoring for him to remain in control. The 28-year-old career backup became the first QB in Cowboys’ history to go 4-0 in their first four starts.

That’s led to speculation among not just fans, but also media members as to whether Dallas even needs Prescott.

Now it appears Jones has made his final decision on what will happen when Prescott gets back to full health. And some Cowboys fans aren’t a fan of his choice.

After starting the entire controversy with his previous comments, Jerry Jones has now seemingly put an end to it. When asked if he could see a scenario where Rush remains in control with a healthy Prescott, Jones said “No. No. As I see it right today.”

Jerry Jones on @1053thefan said he can't see a scenario where the Cowboys would stick with Cooper Rush over a healthy Dak Prescott. "No. No. As I see it right today."

Now, this is Jerry Jones. And as everyone knows he could change his mind by the time he wakes up tomorrow. But it appears that Prescott’s job is safe.

It’s the only logical option, truly. Prescott threw for 4,449 yards, 37 touchdowns and just 10 interceptions to lead the league’s best scoring offense in 2021. He’s also a two-time Pro Bowler who only recently signed a huge contract extension. Rush, meanwhile, is averaging just 224.3 yards per game and has thrown for just four touchdowns in his three starts.

But some fans still don’t love the decision.

The comment Daks 40mil hell yes start him over Rush. That’s so stupid.
1st off that’s Jerry’s problem not ours.
2nd you stick with a hot hand that’s winning games for whatever reason.
Y’all seriously telling me if you’re up big playing blackjack u wanna change dealers..BULLSHIT

Maybe Dak can be backup

Though most were sensible.

FOR THE PEOPLE IN THE BACK!!! U don’t know football if you think Dallas should stick with Rush over Dak https://t.co/H9EQ383rvv

Why is this even a topic lol https://t.co/3kvdPNolz8

I feel so disappointed in The Cowboys Twitter segment that actually wants Rush to stay as QB even if Dak is healthy. I really cannot understand how that makes ANY SENSE. I thought fans would be smarter than that. Sorry if I hurt any feelings out there.

Maybe now Jerry Jones will stop getting in front of microphones, right?…