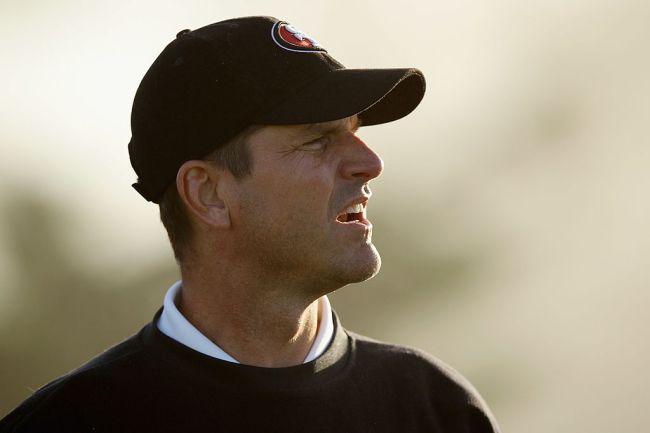 Some would say that rubbing jeans with strangers at a random bar while your team is winless and your wife is bathing the kids at home would be considered bad form.

That is not for me to decide. I remain Planet Fitness on this issue.

While news of Urban Meyer’s thirst saturates the internet, the Jaguars head coach should study the playbook of Michigan head coach Jim Harbaugh, who is focused on his craft even when he’s surrounded by a bevy of coeds.

An unverified story brought into the world by mgoblog purports Jim Harbaugh, at the tail end of his NFL career, revisited his Michigan alma mater and began mingling with some women at Dominick’s, Ann Arbor’s famous outdoor cafe.

That is when Harbaugh allegedly popped open his flirting toolbox and put the girls through a makeshift training camp.

Compare with a Jim Harbaugh college story I heard about:

A female student started flirting with him at a party, he asked if she wanted to play catch, and then he proceeded to take it super seriously. Made her run routes, fired bullets, etc until she got bored and left

The full story was then pulled from the mgoblog site:

He said to the first girl, “keep your hands up, thumbs down,” and he showed her the proper motion with his own hands. When she didn’t get quite right, he grabbed her wrists and showed her how to position her hands. He then paced off 15 yards, held the ball in front of him, squatted like he was under center, patted the ball hard, took three hard steps back, planted his back leg and fired the ball at the first girl. As he let the ball go, you could hear it click as his fingernails hit the ball and, I shit you not, as the ball whizzed through the air you could hear it ssssssssssss… THUNK! It hit the girl in the shoulder and knocked her down.

“Come on, let’s go!” Jim barked. While Girl #1 picked herself up, Girl#2 gamely grabbed the ball and lobbed it back. Again, Jim got in his QB squat, smacked the ball, did a hard three-step drop-back and fired the ball at Girl#3, she ducked but the ball hit off the top of her head and went into the street. Girl#2 ran after it while Girl#3 sat on the ground rubbing her head. When Girl#2’s throw back to Jim was short, Jim got a bit annoyed, and set the girls up in a relay so that two girls were about 25 yards away, and the third girl was halfway in between so that that girls could throw to her, and she would run the ball to Jim. For the next 5-10 minutes, he was firing balls at these two poor girls, knocking them down or hitting them in the face about half the time. He was 100% oblivious.

The thing is, that’s how Jim flirts. If you can run a clean post route, he’ll invite you to film study, which is basically the equivalent of a moonlit dinner for him.

And to be clear, film study is not a euphemism.

I’d like to reiterate that this story remains unverified, but never let the truth get in the way of a good story.