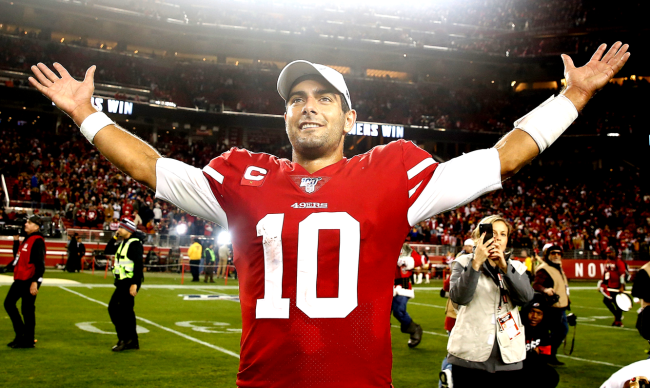 Jimmy Garoppolo may not know for sure where he will be plying his trade next season, but life is still pretty darn good for the 30-year-old quarterback.

Being a single guy with a 5 year, $137.5 million contract, $74 million of it guaranteed in his back pocket, his rugged good looks, and his fame as a successful NFL QB, bro is living the life many people only can dream of living.

Case in point, a recent photograph of Garoppolo posing for a photo with a waitress at what appears to be the Hooters restaurant near the Masters has gone viral on the internet.

Related: Hooters Girl Goes Viral On TikTok Showing The Terrible Accommodations She Was Given At The Masters

Looks like Jimmy Garoppolo got just done playing 18 at the local country club in his Travis Mathew fit and went straight to Hooters. Man is LIVING 😂 pic.twitter.com/Eu2LPPQIya

Jimmy Garoppolo may not be loved in San Francisco, but many NFL fans are still big fans

Given his history of being smooth with the ladies and how much they seem to adore him, NFL fans were loving the picture.

The shoulder recovery seems to be ahead of schedule..

Every time I want to hate on Jimmy G he goes and does something like this and totally redeems himself.

My man is living life for all of us https://t.co/g68LXEzTWs

I just want to make something clear: Hooters has good food at reasonable prices and honestly. There's a lot of other stuff happening that complicates stuff, but I'll defend Jimmy here for his selection of suburban culinary choices.

Related: An Artist Is Drawing Jimmy Garoppolo Every Day Until The 49ers Trade Him And They’re Fantastic

Meanwhile, Trey Lance is out here finishing up his gigantic full back tattoo and it appears will be the man going forward in San Francisco, at least according to the latest reports.

Trey just spent his past week getting a full back tattoo and was hanging out with Deshaun Watson the week before. Players are allowed to have lives outside of practicing and playing football lol pic.twitter.com/8jLHfTEnkQ

On SportsCenter on Sunday, Jeremy Fowler said about the QB situation in San Fran, “Trey Lance has been working out in the Bay Area. I’m told that he’s got indications, at least informal indications from the team, that he’ll be the guy next year. He’s set to be that. Now, whether that means that they would still keep Garoppolo and that could change the dynamic, possibly. But right now, Lance is going to be the starter.”

For some reason, despite going 31-14 as a starter with a stellar 98.3 QB rating, many 49ers fans are more than ready for the Trey Lance era to begin.

Garoppolo is worse than Lance at literally every single aspect of playing QB. Sorry to break it to you.