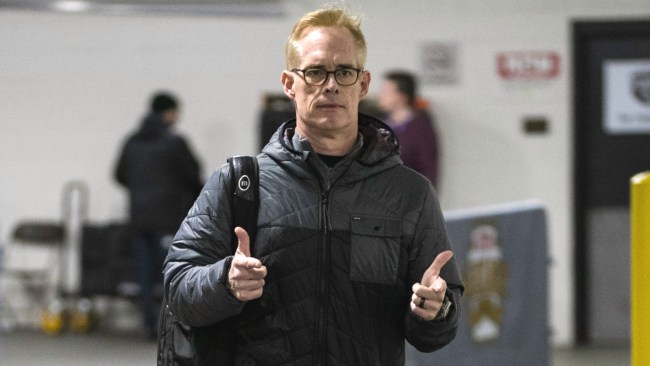 Love him or hate him, and there are many in both camps, Fox Sports broadcaster Joe Buck had forged a legendary career for himself with seven Sports Emmys and numerous calls of the World Series and Super Bowls.

He is also very open about his life, and enjoys poking fun at himself being among the “most hated” broadcasters in sports.

It was that openness that led Buck to share a story with Colin Cowherd on Monday about how he uses alcohol to help him keep things in perspective while doing play-by-play.

Buck said he used to get a beer at baseball games and sip on it now and then to remind himself to relax and have fun, because it’s just a game.

He added that he brought that philsophy over with him to the football broadcast booth, but with his partner Troy Aikman it’s been tequila.

It was an innocent enough story, and actually showed that he “gets it.” He not, as he put it, “refueling an F-16 in midflight.” He is broadcasting a sporting event.

Of course, because, people, Buck caught a lot of flak for this admission and felt the need to have to defend himself, which he did in a series of tweets.

“I don’t tweet much anymore, but I feel compelled to send a few about this dumb drinking in the booth story that is complete clickbait,” Buck wrote. “Also, me giving it more attention is moronic on my part, but so what?

“My bosses at FOX have not said a word to me about it. They know how dedicated I/we are, and how hard we work and how much we care about EVERY WORD that comes out of our mouths. Most of all they trust us. For those three hours and through all the prep NOTHING is more important.

“My only regret with anything I said on Colin’s pod was mentioning @TroyAikman. Nobody has more integrity or works harder than him and I am blessed to call him one of my best friends on the planet. We have fun with what we do and back then I started this trend in baseball and when I went back to football I told him I had the beer in my line of sight as a visual reminder and took a sip from time to time – to be loose and to remember to enjoy it. I have a tendency to get stressed and try to be perfect calling a game – as impossible as that may be.

“As I said with @ColinCowherd it wasn’t there to be consumed, it was there as more of a visual reminder that the world wouldn’t end if I made a mistake. It was symbolic and one of MANY things I would use, like texting with my wife and kids or calling my mom at half – just to chill.

“Troy had zero to do with it. I am an open book – sometimes to a fault, but I just really don’t like hiding anything (see: hair transplants or battling depression and anxiety). But when a http://NJ.com headline writer says I said I had 1 or 2 drinks during a game??

“Well it is just another reminder that journalism is indeed dying and clickbait rules the day. Please listen to the podcast starting at the 5 minute mark and let me know where I said that. I didn’t. I am 51, not 15. I believe I am old enough to understand what a drink is.”

sometimes knowing over 100 million people are on the other end of what comes out of my brain and mouth can be stressful. I have not done the trick in about four years, but I am not saying I wouldn't again. Here is a pic of a corner of my board for SUPER BOWL 54. pic.twitter.com/vGUDlQoCtl

“It is simple but it works for me. Let me know when you do a live event for a big audience and see what helps you get through the day and be your best – then share the info with me. I may use that too,” Buck ended his screed.