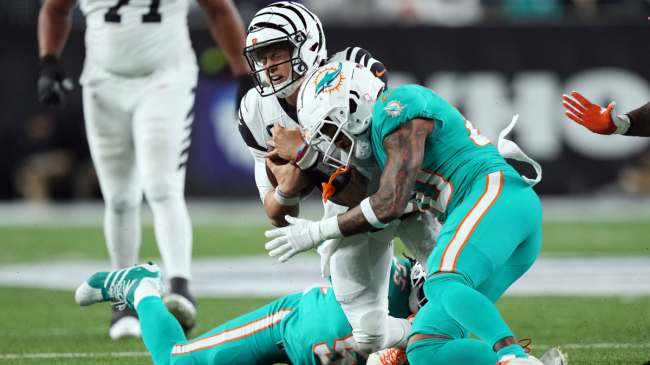 Tua Tagovailoa has been at the center of NFL attention over the last two weeks due to a pair of serious injuries suffered over his last pair of games.

In a Week 3 matchup against the Bills, the Miami quarterback went down with what looked to be a severe head injury after being hit by a defender. The hit was jarring enough that Tagovailoa lost his balance while trying to get back to the huddle.

But after going through the concussion protocol on the sidelines, Tua was inserted back into action. A back injury was pinpointed as the reason for Tagovailoa’s wobbly reaction following the collision. The decision to put the passer back on the field received pushback from both fans and media, and even spurned an investigation from the NFLPA.

Then, the incident got worse.

The issues stemming from the original injury were compounded when Tagovailoa suffered another apparent head injury just four days after that initial hit. The signal caller’s body seized up in an act many call “fencing.” The scary scene had many worried about long-term effects of having possible concussions that close together.

The quarterback on the other end of that most recent matchup is now speaking out on his experience with head injuries.

Joe Burrow talks about his history with concussions

Joe Burrow was on the sidelines watching Tua’s concussion this past Thursday. He’s now opening up on his own experience with head trauma.

Burrow appeared on the Colin Cowherd podcast to open up on the subject. While he may feel for Tagovailoa, the Bengals’ QB says it’s what they signed up for when they decided to play in the NFL.

“I think everyone has been [concussed] that plays this game… I have never had any lasting effects from a concussion. I’ve been hit and forgotten the rest of the game before. That’s happened a couple of times. But I’ve never had one where I have headaches for a week or have symptoms of concussion after the game.

He then went on to talk about what he thinks about these concussions, and what the NFL needs to do to prevent them. Burrow doesn’t believe added rule changes will necessarily eliminate them.

“You can make all the rules you want to make the game as safe as you possibly can, but there’s an inherent risk and danger with the game of football. You have 300-pound men running 20 MPH trying to take you head off… It’s part of the game, I think. Part of what we signed up for.

“That’s the game that we play. That’s the life that we live. And we get paid handsomely for it.”