How Much Time Will Joe Burrow Miss? A Leading Neurosurgeon Told Us The Best Cast Scenario For His Return In 2021 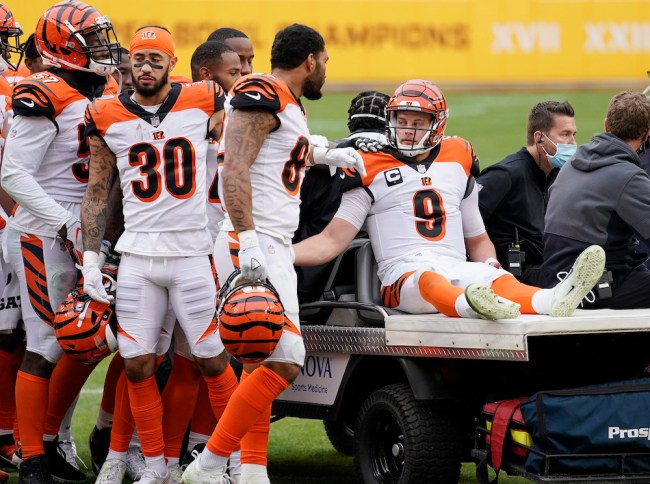 An MRI showed the Cincinnati Bengals rookie quarterback tore his ACL and MCL and suffered other structural issues.

The Bengals are staying mum on the length of time that Burrow will miss. When pressed for a rough estimate, the team marked his return for “sometime in 2021.”

“It’s going to be close but Burrow could be ready at the start of the 2021 season,” explained Daniel Lieberman, MD.

Lieberman is a Medical Director at the Phoenix Spine & Joint. He did his neurosurgery residency at UCSF, the nation’s leading neurosurgery program, and has completed over 4500 surgeries serving more than 12,000 patients over the past 12 years.

Dr. Lieberman shared his opinions on Burrow’s injury, the type of rehab the rookie will need to complete, and whether Burrow will ever be 100% again.

What kind of rehab will Burrow have to do?

Right after surgery, he will be on crutches and his knee will be in a brace while the bone begins to heal around the reconstructed ACL.

During that time, he will do some simple range of motion exercises to keep his quads active and his knee from losing range. After week four, he will likely be weight-bearing and can begin light cardio (like a stationary bike) and working on gait.

By week 12 he can begin light running and exercise with increased resistance. This is the phase where he will work mostly on strength.

By week 20 he will be putting more and more force on the reconstructed knee, with side to side exercises.

Sometime after week 24, he’ll be cleared to practice normally with the team, but his time may be restricted.

The Bengals said Burrow suffered “other structural issues.” What could those be?

With dislocation like we saw on the video, athletes usually suffer injuries to more ligaments than just the ACL.

In Burrow’s case, there were reports that the MRI showed an MCL (medial collateral ligament) tear in addition to the ACL.

Other athletes have damaged the PCL (posterior cruciate ligament) as well.

What’s the likelihood of Burrow being ready for week 1 of the 2021 NFL season?

It’s going to be close but Burrow could be ready at the start of the 2021 season.

The 2021 NFL season starts in 41 weeks. Rehab after ACL reconstruction starts right away, but they’re limited at first while the graft heals.

The surgery is not actually a repair, it’s a reconstruction. It takes 6-12 weeks for the bone to heal around the graft; until then athletes are limited to a range of motion and mobility exercises.

Everyone is different, but most young and healthy athletes are ready to resume limited team practice in 24-36 weeks.

It may be a game-time decision, but there’s every reason to believe he could start the season for the Bengals.

Yes. After the reconstructed ACL graft is healed and he completes the rehab program we can expect Burrow to be back on field without restriction.