A Former No. 1 Overall Pick Told Joe Burrow To ‘Pull An Eli Manning’ And Demand Trade If Bengals Choose Him In 2020 NFL Draft 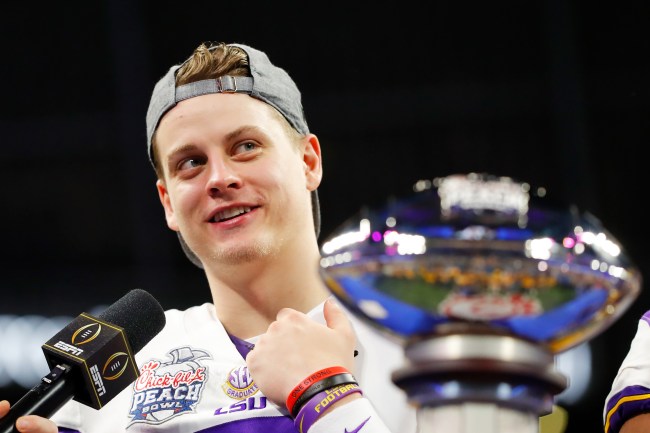 Joe Burrow is projected to be taken No. 1 overall in the 2020 NFL Draft by the Cincinnati Bengals, which would bring the native Ohioan back to the state where he played high school (and parts of college) football. But, while the Bengals might be enamored with the LSU Tigers quarterback after he won both the Heisman Trophy and College Football National Championship Game last season, it doesn’t sound as if Burrow’s yet sold on playing in Cincy.

In a recent interview with Drew Davison of the Fort Worth Star-Telegram, Joe Burrow mentioned the “options” he has when it comes to the process, giving some details into what he might currently be thinking. Of course, that could change as he prepares for the pre-draft evaluations and gets to talk with teams, including the Bengals, but, at the moment, the talented signal-caller appears to be dumping all over the notion of playing in Cincinnati. Take a look at what he said the other day when asked about the possibility, per Pro Football Talk.

“Right now, I’m focused on being the best football player I can be. I’m in this unique spot. You can go watch my film. I don’t have to prove myself at pro day and at the Combine, so I’m in a unique spot where I can focus on getting ready for the year.”

Uh, yeah, that doesn’t exactly sound as if he’s amped up to play for the longtime dysfunctional franchise. And, if Burrow’s trying to win a staring contest with the Bengals by showing little to no interest to play for them, he’s doing a pretty good job of that right now. Again, that could change, but, damn, it seems like it’s going to take some serious convincing.

However, according to someone familiar with the whole NFL Draft process — a former No. 1 overall pick himself, Steve Bartkowski, who was selected by the Atlanta Falcons in 1975 — Joe Burrow should stick to his guns and avoid ever playing for the Bengals; even if the team does choose him.

Also speaking to Drew Davison of the Star-Telegram following the Davey O’Brien Award ceremony, Bartkowski gave his honest opinions about a Burrow-Bengals pairing, and even went as far as advising the soon-to-be rookie quarterback to “pull an Eli Manning” and demand a trade should the team choose him No. 1 overall in this year’s draft.

“[Cincinnati] is not the best organization,” Bartkowski said Monday, via Drew Davison of the Fort Worth Star-Telegram. “You know, times change; things change. Atlanta wasn’t a good organization until Arthur Blank bought the team [in 2002]. It was a terrible organization. They didn’t know the right hand from the left to be honest.

“I know what it’s like to go to a bottom-feeder team. I’d hate to see that happen to him to be honest. They beat me up. I spent more time at the hospital recuperating from injuries my first three years than I did throwing touchdowns. It was tough.”

Bartkowksi and Burrow met at a Davey O’Brien Award event Sunday night in Fort Worth. That’s when Bartkowski, who is in the Falcons’ Ring of Honor, advised Burrow and his family to just say no to Cincinnati.

“They’re Ohio guys,” Bartkowski said. “I might’ve offended them by telling them that, [but] if it’s the Bengals, I think I’d pull an Eli Manning on that one. I said, ‘You’ve got a chance to do that. That’s happened.’ [John] Elway kind of set the tone, then the Mannings delved into it after Eli was picked by San Diego.”

There have been reports that the Bengals could be open to trading away the No. 1 overall selection in the 2020 NFL Draft, but is that just a smokescreen to try and dangle the idea to get a king’s ransom of assets in return? Who knows? But, given the current stance and lack of enthusiasm about playing for the team that Joe Burrow’s currently showing, Cincy might be better off finding a partner to swap picks with and avoid a dysfunctional relationship from the jump.