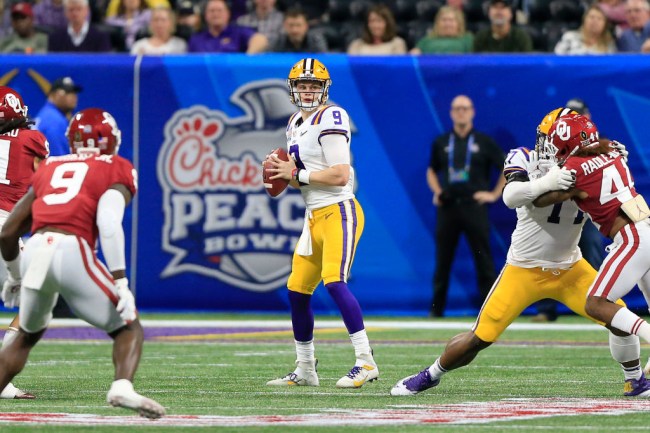 As two touchdown underdogs, everyone knew that it was going to be tough for Oklahoma to hang with LSU in the Peach Bowl. The Tigers are the No. 1 team in the country after all, and for a number of reasons, but this team goes as Joe Burrow goes.

And oh boy did Burrow come out firing in this one.

The numbers the Heisman Trophy winner put up in the first half looked like video game numbers. Actually, if you put these sort of numbers up in one half of the old NCAA college football game it would officially be time to increase the difficulty.

Burrow threw his first touchdown on LSU’s third play of the game which was a preview of what was to come. He had three touchdown passes to his name at the end of the first quarter then flipped things to another gear throwing four touchdowns in the second quarter.

Seven touchdowns in two quarters of football speak for themselves, but there’s more to the story here.

It turns out that Mercedes-Benz Stadium in Atlanta has been mighty kind to Burrow in his two starts in the dome. He threw for four touchdowns in LSU’s win over Georgia in the SEC Championship game and after picking up touchdown toss No. 5 midway through the second quarter against Oklahoma, he actually surpassed Falcons quarterback Matt Ryan’s entire season total inside the Atlanta stadium.

It’s true, Ryan has thrown for just eight touchdowns in seven games this season inside Mercedes-Benz while Burrow’s touchdown total in the building had already reached double-digits in less than six quarters of play.

In 5 1/2 quarters at Mercedes-Benz Stadium this season, Joe Burrow has 9 passing TDs.

Matt Ryan has 8 there this season.

It’s worth pointing out that Burrow’s first four touchdown passes were all hauled in by Justin Jefferson, so you have to tip your cap to the wideout, too.

Burrow picked up touchdown No. 8 of the game early in the third quarter, but it was just a short quarterback sneak near the goal line, nothing too crazy.