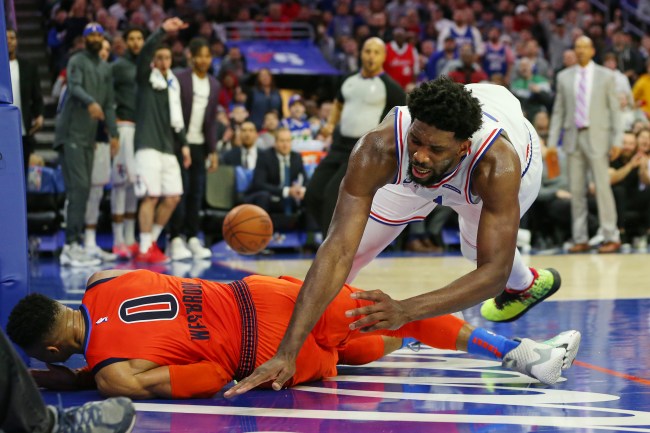 Russell Westbrook and Joel Embiid despise each other. Add Embiid to the list of People On Westbrook’s Shit List with KD, Zaza Pachulia, Rudy Gobert, Jusuf Nurkic, and every other player in the NBA.

A quick recap of Westbrook and Embiid’s entertaining feud:

The genesis of the beef goes back to December 2017 when Embiid waved goodbye to the Oklahoma City crowd when Steven Adams fouled out of a game. The Thunder would go on to win the game and Westbrook wouldn’t let Embiid leave the court without giving him a taste of his own medicine.

The next time the two met, Embiid dunked all over Westbrook and stared him down as he ran down the court.

Joel Embiid with the nasty dunk on Westbrook 😱😱😱😱 #NBA pic.twitter.com/Lsig5xQhmT

Just last month, Embiid fouled Westbrook hard on a fast break with under two minutes left in a tight game.

Russ and Embiid get into it every time they play 🍿 pic.twitter.com/klqbiDR9Ug

When asked by a reporter after the game if things were “cool” with Embiid, Westbrook responded emphatically with two words: “FUCK NO!”

Reporter: "So you [and Joel Embiid] are cool?"

Flash forward to this Thursday during the live broadcast of the All-Star team selections with Giannis and LeBron as the two captains.

Giannis initially selected Embiid in the first round, and later traded Ben Simmons to James’ team in exchange for Russell Westbrook, saying to LeBron, “I know Ben is your guy, so I’ll do it.” LeBron then mentioned that Giannis can get Embiid and Russ on the same team, “and we know how well they get along.”

After the selections were made, Embiid jumped on Twitter to give a precise, yet hilarious response.

This couldn’t be better from a fan’s perspective and NBA Twitter knows it.

embiid and westbrook on the same all star team is delicious