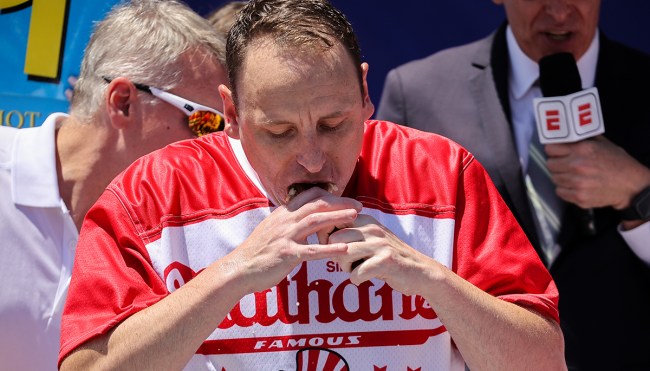 On Monday, Joey Chestnut cemented his status as America’s greatest living athlete when he housed 63 wieners and the buns they were tucked into on his way to winning the hallowed Nathan’s Hot Dog Eating Contest for the 15th time.

That total was a far cry from the 76 glizzies the competitive eating icon was able to put away when he set an all-time record last year. However, his performance in 2022 was arguably more impressive when you consider he also took a few seconds to put a protester in a chokehold before resuming his quest for yet another Mustard Belt.

Not seen on TV was Joey Chestnut putting a protestor in a chokehold while scarfing another hotdog en route to victory pic.twitter.com/nZRZ1AR7jm

If you somehow had any doubts competitive eaters are real athletes, that incident should put them to rest.

On Tuesday, Chestnut joined The Pat McAfee Show to reflect on the win and (more importantly) shed a bit more light on what went down during the moment that resulted in multiple sportsbooks offering refunds to bettors who wagered on the total number of hot dogs he’d down.

Was it just natural reaction with that protester yesterday @joeyjaws…#PMSLive pic.twitter.com/mf1zRFYY5q

Here’s what he had to say via Fox Sports Radio:

“It was reaction. Just natural instincts. I thought somebody fell into me at first, I didn’t know it was a protester until I saw the mask and it just happened and I wanted to get back into eating…

As soon as I grabbed him I realized he was a kid. I was like, ‘Oh, this is a kid.’ I mean, he was vegan so he was really skinny. So, yeah, he fell to the ground and he curled up and I got to get back into it.”