John Daly Casually Ripping A Cigarette While Talking To Tiger Woods At St. Andrews Is Why He’s A Legend 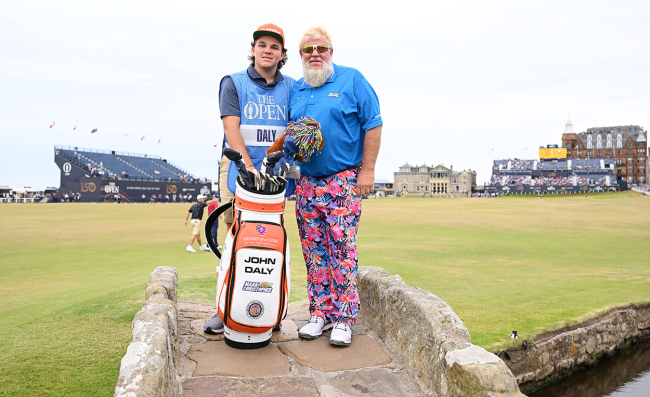 John Daly does what he wants, when he wants. The 56-year-old golf legend is known just as much (if not more) for his shenanigans as he is for his play.

Daly, who recently said that he would play better on the PGA Tour if he was allowed to compete barefoot and drunk, never shies away from a party— even if it means leaving the hospital after a stroke and getting after it. He has won both the PGA Championship and The Open Championship during his long career, but recently it has been more about competing to compete rather than win.

Over The Masters weekend, Daly partied it up at Hooters and jammed out with Hootie and The Blowfish. Not long thereafter, he hit up Hooters and the casino after an impressive showing at the 2022 PGA Championship.

Two weeks later, Daly dominated Memorial Day Weekend by laying all of the way out on a textbook belly flop. Last week, he went full-send once again and was crushing drives across a busy highway in Ohio while barefoot.

This week, Daly is in Scotland for The Open Championship, which he won in 1995. This year’s tournament, the 150th iteration, is being held on the Old Course at St. Andrews. It is one of the oldest and most iconic venues in the sport.

On Monday, as the players started to get ready for the weekend, Daly casually ripped a cigarette while on the putting green with Tiger Woods. Daly is known to crush darts while on the course, but doing so without hesitation at one of the most iconic places in golf is why he is a legend.

The moment in which Woods broke down the course with the cig-smoking Daly is pretty cool, take a look: