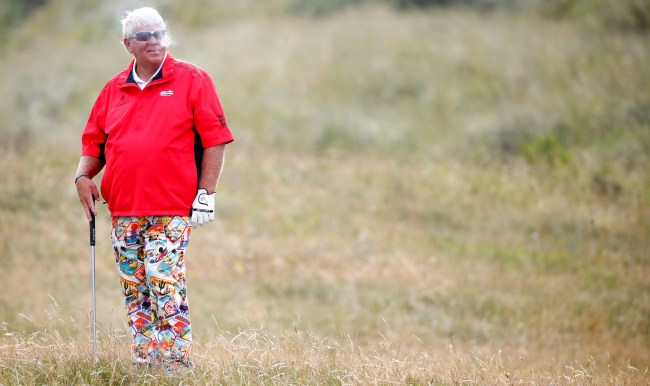 A little over a week ago, golfing legend John Daly created a video for The Trump Organization’s social media channels in which the 53-year-old promoted drinking vodka as a cure for COVID-19.

“I’ve kind of got a cure for this. I think you just take… I only drink one drink a day, it just happens to be a bottle of good old Belvedere,” Daly said while holding up a bottle of vodka. “Just drink one of these a day. You know, sippy, sippy on a McDonald’s diet Coke, you know, wash it down pretty good. Never have a hangover. And that’s the way you kill this coronavirus I believe. But ya’ll be safe, take care and hopefully we’ll be getting back to the things we do best pretty soon.”

As we reported back then, numerous people were very displeased with Daly’s message and/or flippant attitude towards the damage the coronavirus can do and has done to thousands of people’s health.

Over 15,000 Americans have died, but as w/ everything trump, here’s @TrumpGolf promoting an old white man that looks more dead than alive, telling everyone that drinking a bottle of vodka a-day, a “sippy, sippy” at a time, washed down with Diet Coke is a way to fight corona. pic.twitter.com/O3PnAV9Zvt

On Monday, Daly was on Golf.com’s Subpar show and spoke about all of the backlash his video created.

“Shame we can’t have any humor in this country or this world anymore, you know, without somebody busting your you know what,” Daly told hosts Colt Knost and Drew Stoltz. “I didn’t mean to hurt anybody’s feelings. Hell, I was just doing it for fun, just try to get some laughs in the tough times we’re going through.”

“WHO” really did a lot for us didn’t they? Grow up reporters, I did a video for fun to put some laughter in us through this tough time! Y’all are a joke!

“We all need some (fun) right now, we all need a sense of humor right now,” he continued. “We pray for the people who have fallen and pray for this virus to get over. I didn’t mean any harm by it.”

According to Golfweek, Daly said he made the video for members of President Trump’s golf clubs around the world.

So back to his original message. I never was clear on what Daly meant by “I only drink one drink a day, it just happens to be a bottle of good old Belvedere.” Does he just drink one shot a day or one bottle a day? Guess we’ll just have to listen to Daly’s entire interview below, which just aired at 12 PM ET on Tuesday, to find out.