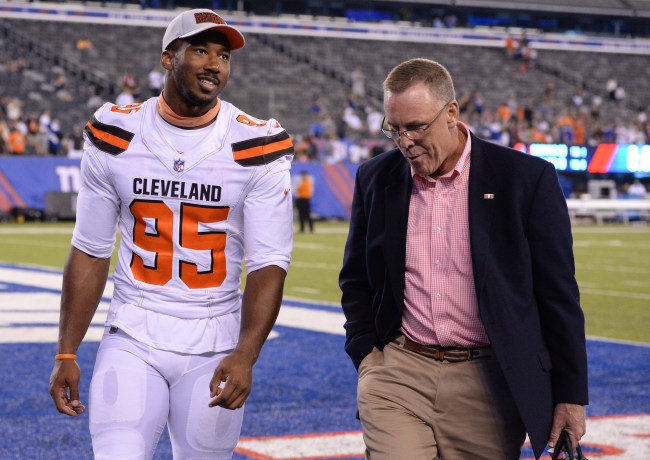 John Dorsey may not have delivered on his promise to turn things around for the Cleveland Browns during his two-year tenure with the beleaguered franchise, but the team’s former general manager is still showing some love to the organization following the recent Myles Garrett interview with ESPN.

For those who (somehow) haven’t seen it, Garrett doubled down on his claim that Pittsburgh Steelers quarterback Mason Rudolph did, in fact, use a racial slur during the ugly brawl between the two during a game last season, which resulted in the massive defender using Rudolph’s helmet as a weapon by swinging it at him and clocking him on top of the head. And, while nobody knew for sure what caused Garrett to get so upset in the moment, rumors leaked out that it may have been from a racial slur — something the defensive end claimed prior to his six-game suspension from the NFL.

Here’s a look at a clip from the most recent interview involving Garrett and ESPN’s Mina Kimes.

In his first in-depth interview since his suspension, Myles Garrett opens up on what happened during that Week 11 incident. pic.twitter.com/PfiBaINSPT

Although the league has claimed that there’s no audio from the game, nor any evidence of a racial slur from Mason Rudolph, Myles Garrett is standing by his allegation — which could lead to a lawsuit from the quarterback, according to his legal representatives.

Recently reinstated by the NFL, Garrett is doing his best to clear his name and reveal why he went so crazy during that Thursday Night contest. And, according to John Dorsey, the former No. 1 overall pick hasn’t changed his story once, claiming Garrett told him following the brawl that Rudolph used a racial slur.

Garrett contends he told former Browns General Manager John Dorsey, coaches and defensive tackle Larry Ogunjobi on the heels of the incident that Rudolph had uttered a racial slur.

On Monday, Dorsey told the Beacon Journal in text messages it’s “correct” and “it’s the truth” that Garrett informed him of the racial slur accusation right away.

Dorsey’s assertion is consistent with a prepared statement he released Nov. 21 in which he said Garrett “was open and honest with us about the incident from the start.”

As the Beacon Journal report claims, John Dorsey has maintained his defense of Garrett, even after the Browns fired him, making it appear that Rudolph may have uttered something he could regret should audio ever be released. Unfortunately, we may never know the truth because of the league’s lack of evidence.

During the ESPN interview, Garrett also noted that he had planned to reveal the same allegation about Rudolph’s racial slur immediately after the incident with FOX Sports’ Jay Glazer, as the two had an interview arranged. That interview was cancelled, but the defender maintains he was planning on getting his story out there a mere days after the brawl.

ESPN aired parts of its Outside the Lines interview with Garrett on Thursday night and Saturday morning before posting more of it on the ESPN Daily podcast.

“So they knew from that night. But I wanted the media to hear about it, whether it was through Jay Glazer or eventually through the aftermath of the meeting.”

Myles Garrett has also mentioned a desire to talk to all the Steelers players involved in the ugly incident, which includes Mason Rudolph. Who knows if the league would allow that to happen, but it’s a nice sentiment for him to try and apologize, move on and bury the hatchet. Obviously, with the allegations still floating around, that probably won’t occur anytime soon.

Who knows what really happened, or what was really said, but, with Garrett standing by his claim — and John Dorsey supporting it, even though he’s no longer with the Browns — at least he’s not flip-flopping on his stance, and his standing by the same allegation he had months ago. Now if only the NFL could prove which side was right, this thing could all be better understood.