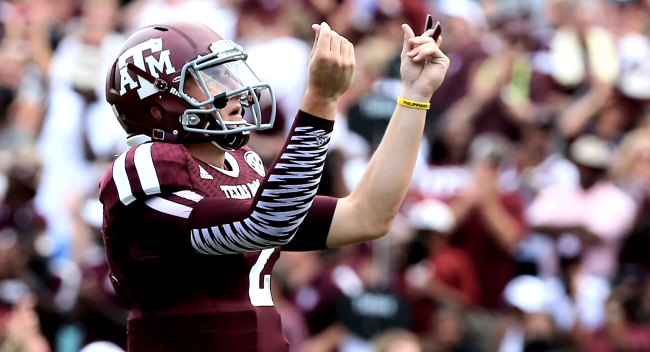 While future professional golfer Johnny Manziel was in college at Texas A&M, internet troll Darren Rovell infamously called him out for allegedly getting paid to sign autographs. Manziel ended up being suspended for the first half of the Aggies’ season opener in his sophomore year as a result.

Seven years later, Manziel finally admitted what everyone had pretty much assumed and admitted that, yes, he did get paid to sign autographs after winning the Heisman Trophy as a freshman.

Earlier this year, as the University of Tennessee football team was embroiled in a bit of drama having to do with them allegedly giving recruits McDonald’s bags filled with money during visits to the campus, Manziel and Todd Gurley (who was suspended while at Georgia for taking money in exchange for autographs) “joked” about getting paid while in school.

This week, Johnny Football took things a step further by admitting some of the dollar amounts he got paid for signing autographs while still in college.

Related: Johnny Manziel Says Getting Arrested Helped Him Win Heisman, Mixes It Up With Twitter Trolls

During an appearance on Bussin’ With The Boys on Thursday, Johnny Manziel explained that he had about $65 in his bank account when someone approached him.

He continued, “So I take this guy’s number down. We’re doing it all sneaky. We don’t want to get caught. We’re trying to learn from everybody else who got caught.”

After signing “probably 10,000 pieces” of merch, Manziel says another guy who was bringing pictures over to him at the first autograph signing approached him to do the same thing, only this time the guy told him he would be getting paid real money: $30,000.

“So, this guy’s pretty much, ‘All right, go to this room at the Fontainebleau,” he says. “All this stuff will be in there laid out. When you’re done, just send me a picture of all of it. I’ll give you the code to the safe, the money will be in there.'”

Johnny Manzel added that he did this several times over the next few months, raking in some serious cash (“I got to make a decent living in college”), but says he never took a dime until he won the Heisman, so the NCAA shouldn’t take away his trophy like they did with Reggie Bush.

He then added, “I think my statute of limitations are up. So, you can blow me again!”