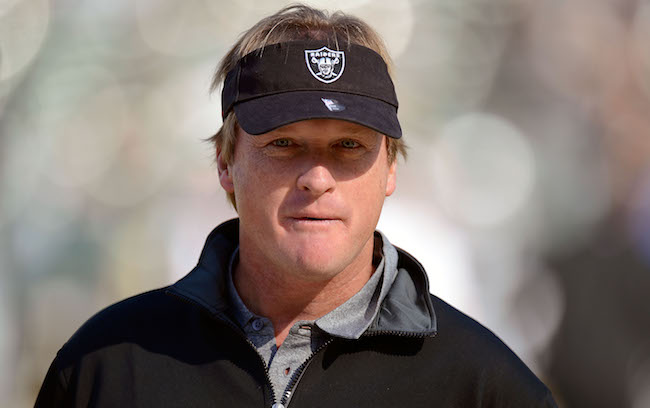 A few months ago, fans of inexplicable in-game promotional spots were shocked to learn about the sad, sudden, and stunning departure of Jon Gruden, who decided to defect from his job as a broadcaster on Monday Night Football to take back the helm as the coach of the Oakland Raiders (and was reportedly paid handsomely for doing so). While some players aren’t exactly fans of the visor aficionado, he’s shown an ability to recognize young talent before, and we can only hope that Gruden can help us eventually live in a world where that one Raiders fan who always shows up to a bar in a Rich Gannon jersey is yelling at the television in joy instead of anger.

It’s been close to a decade since Gruden has coached in the NFL, and many people are speculating he could bring back a more antiquated style of play based on how long he’s been in the league. With that said, if his views on instant replay are any indication, the resurrected coach isn’t a huge fan of all of these new-fangled football rules.

According to NFL.com, Gruden— who definitely calls the Microsoft Surfaces on the sidelines “the iThings”— thinks the NFL would be better off if it got rid of instant replay:

“I’d like to eliminate instant replay, honestly. That would be my No. 1 thing. Let the officials call the game. That’s just my opinion. I try not to play that game of ‘wish-list,’ you know what I mean?”

“I think slow-mo replay is the biggest problem with replay. When you’re looking at is it a catch or isn’t it a catch at that speed it’s hard to tell. So I think if you threw that slow-mo out, I think you’d get back to common sense. Let the naked eye determine some of these calls. But it always looks like pass interference when you’re going that slow; it always seems to look a little bit more dramatic in slow motion.”

At least he has the new catch rule to look forward to.