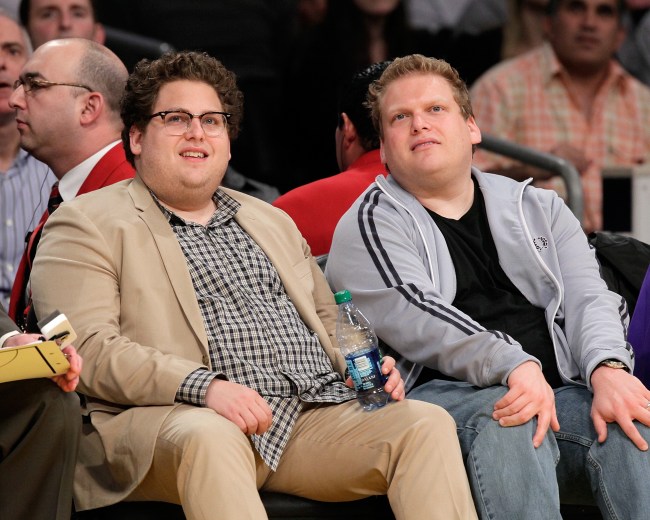 We’ve read, seen, and heard amazing Kobe tributes from all corners of the sports world (Shaq, Bill Belichick, Jerry West, to name a few), but I certainly did not expect to be moved by a Jonah Hill tribute.

The 36-year-old actor was born in Los Angeles and grew up a huge Laker/Kobe fan, a fandom he shared with his late brother, Jordan.

On Thursday, Jonah shared an “awkward photo” with Mamba that was captured during his “favorite memory” with his brother, who died unexpectedly in December 2017 from a blood clot blocking an artery in his lungs at the age of 40.

This picture became a funny internet thing years back and it always made me laugh when I’d see memes of it . I used to love “on purpose, very awkward photos” whenever I was around someone I respected and this is about as comically awkward as it gets. Ah, your early 20s. It’s a dumb bit but I really liked it at the time. I hesitate to post this as it’s usually connected to humor. But for me this photo represents a LOT more. I’m sitting next to my brother and he’s taking this. It was the night we both met Kobe and he was so nice to us. So funny, so amazing and so kind (in the middle of a game!). My brother and I grew up worshiping the Lakers and because of my job we got to sit next to Kobe and the whole team! I have lived a privileged life. Truly. We were literally buzzing with excitement to meet our hero and it’s one of my favorite memories ever. It’s my favorite memory with my brother . I’m sitting between Kobe and my brother and now they’re both gone. I have been staring at this photo for days in disbelief and sadness and joy. It’s my favorite picture and I think it represents for me, all of the hard and amazing things in life and how fleeting they are. But their fleeting nature doesn’t make them any less beautiful. I’ve been thinking a lot about saying Rest In Peace and what that means. But I don’t think Kobe or my brother are resting. I think they’re hustling up there. Working hard and getting shit done. Cuz that’s what they do. All my love to the ones here left behind. Take care of each other and love each other . That’s the lesson I’ve learned . ❤️

Following his death, Jonah Hill announced that he was working on giving up all partying and taking on a healthier lifestyle.