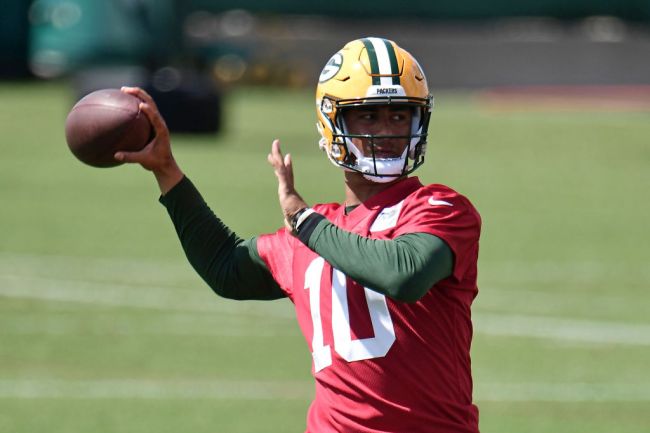 The drama and uncertainty involving Aaron Rodgers and the Green Bay Packers has dominated the storylines as of late following some cryptic statements from the quarterback in the aftermath of the Packers’ loss in the NFC title game.

There appears to be some turmoil between Rodgers and Green Bay’s front office, despite their efforts of underplaying the situation, and it all stems back to the 2020 NFL Draft when the Packers surprisingly traded up to draft quarterback Jordan Love in the first round.

Love was the third-string quarterback in Green Bay during his rookie campaign, therefore we didn’t hear from the Utah State product all that often during the season, but he did decide to chat with CBS Sports recently about his future in Green Bay amid the drama surrounding Rodgers’ future.

“The situation I’m in, they brought me in to learn as much as I can, and that’s really all I can do,” he said. “I don’t make those calls; they do. Obviously, (like) anybody, you wanna be out there competing. The way I look at it, if I’m not ready to be out there, then I have to keep working. I mean, I definitely grew a lot during the season. It’s a lot when you first get there, your head’s kinda spinning, but once you get your feet into it and get through the season, your confidence gains.”

Love was brought in to possibly one day take over the offense from Rodgers whenever that opportunity may present itself. It was simply the shock factor of his name being called so early in the 2020 NFL Draft that seems to have made things uneasy between Rodgers and the higher-ups in Green Bay. Rodgers’ window to win another Super Bowl is only shrinking at 37-years-old and drafting a quarterback instead of a skill player to immediately help the offense was an extremely bold, and questionable, play by the Packers.

Love tipped his cap to Rodgers, his work ethic, and knowledge of the game, but it’s clear that he went through some growing pains when he first got on the scene based on some of his statements with CBS. Not only did Love say “it’s a lot when you first get there,” but he also referenced that he’s “over here learning the playbook” while Rodgers already knew it.

Do you think Jordan Love will make his NFL regular-season debut with the Packers at some point during the 2021 season? Let us know in the comments below.