Jordan Spieth Thinks The Masters Is Bryson DeChambeau’s To Lose 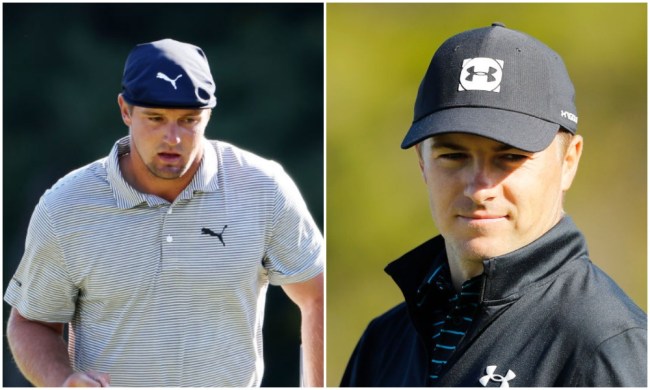 Immediately after Bryson DeChambeau overpowered Winged Foot to win the U.S. Open in September, a lot of people’s attention turned to the Masters trying to figure out whether or not Augusta National will be able to contain the game’s longest hitter.

While Augusta National will be playing different in November, the course will still be on the shorter side and feature practically zero rough. DeChambeau will be able to hit driver on every Par 4 and Par 5 and take out any trouble with his distance off the tee.

DeChambeau will unquestionably be a Top 3 favorite heading into the Masters, everyone knows that, and for Jordan Spieth, the Masters will honestly be DeChambeau’s to lose.

Spieth joined the Subpar Podcast and explained that Augusta National likely won’t present any trouble for DeChambeau and his new-found distance. You have to respect the honesty.

“I remember talking to Justin [Thomas] and Rory [McIlroy] about this at lunch one day,” he said. “We were sitting having lunch and watching the telecast and they were showing Bryson. I was like, this guy has to lose the Masters to not win the Masters.”

“His fairway on 9 goes from the scoreboard of 1, 90 yards left of the fairway, to the bunkers off no. 7,” Spieth laughed. “I mean, it’s a thousand yards wide.”

As Augusta National is set up right now, and if the weather cooperates, DeChambeau should be able to overpower it with ease.

The scary thing is, we’ll see the rescheduled Masters played in mid-November and then do it all over again at Augusta in April. DeChambeau will have two shots at winning his first green jacket and Spieth certainly isn’t the only one out there essentially guaranteeing that he’ll be picking up a win at Augusta sooner rather than later.