Jose Altuve Was Knocked Out Of A Game Following A Nuts-First Slide Into Base And Proved Karma Is Very, Very Real 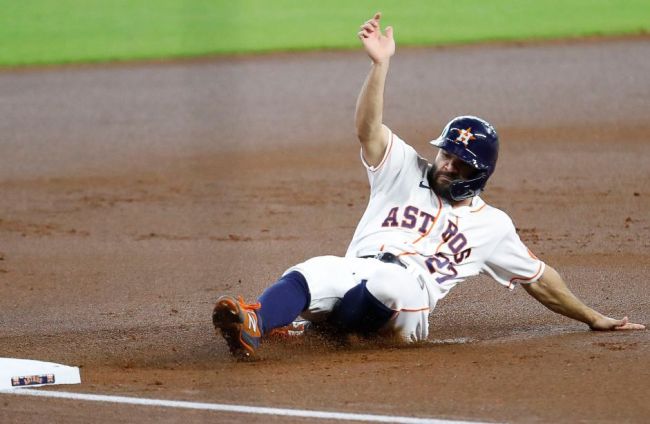 In 2004, the Red Sox launched what is perhaps the most dramatic comeback in the history of sports after finding themselves facing a 3-0 deficit against the Yankees in the ALCS, as they managed to win four straight games with the help of late-game heroics from David Ortiz and Dave Roberts before proceeding to finally break the Curse of the Bambino by bringing their 86-year World Series drought to an end.

That postseason was basically a baseball fan’s wet dream, and while you’d think the MLB would’ve benefited as a result, I’d argue Boston securing a championship in such a dramatic fashion was actually a terrible development for the sport. As a middle schooler who’d lived and breathed the Red Sox at the time, that victory provided me with a high that none of the substances I’ve consumed in my adult life have managed to replicate, and while I was obviously thrilled to see them win another World Series three years later, that moment marked the beginning of the end of my diehard fandom when I realized it hadn’t resulted in the same kind of rush.

I’d argue baseball as we know it peaked with the series of events that transpired during that magical October, as it really had nowhere to go but down from there. Part of the reason I eventually lost interest in the sport was that I realized I could spend the rest of my life chasing a dragon I’d likely never be able to catch, as I can’t imagine a combination of circumstances that could possibly provide an emotional hit as intoxicating as the one I experienced almost 16 years ago.

However, I’ve probably paid more attention to baseball this year than I did over the course of the previous decade thanks to the Houston Astros, who injected the MLB with the massive syringe of drama it desperately needed by cheating their asses off to win the World Series in 2017. Thanks in no small part to Rob Manfred’s decision to let the sins of every player implicated in the scandal go unpunished, the team has had a target on its back since the start of spring training as the rest of the league has been forced to dole out some frontier justice.

Jose Altuve has been a particularly popular target during a season that’s seen the second baseman struggle to come close to putting up the kind of numbers he did when he cheated on his way to securing MVP honors in addition to a championship ring. On Thursday, he was treated to some more retribution of the divine variety during the first inning of Houston’s game against the Rangers, as the universe gave him a dose of karma directly in the family jewels during a slide that saw him go nuts-first into third base.

Looks like Altuve racked himself on third base 😬 pic.twitter.com/6VaWfOVfx7

He was understandably in some discomfort following the slide and only managed to make it through one more inning before he was pulled from the game (the team cited right knee discomfort as the culprit, which makes me question how familiar their medical staff is with human anatomy).

Jose Altuve is out of the game after two innings.

Altuve seemed to slid hard into third base in the first inning. Will keep you updated.

I’d never actively root for a player to be injured and I obviously hope this isn’t anything serious, because if it is, I’m going to feel kind of bad for deriving as much pleasure as I did from it.