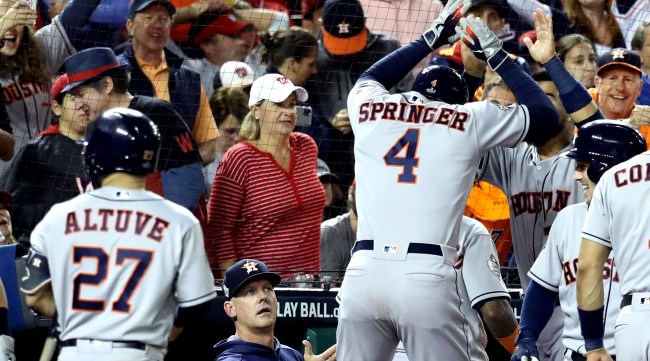 Point and laugh, folks. Point and laugh. Without their little garbage can-banging scheme to illegally know what pitches are coming in 2020, Houston Astros stars Jose Altuve and George Springer are having the worst seasons of their careers.

Of course that could just be a coincidence, but hey, they made their beds, now they have lie in them.

As for Springer, he is batting .193 with 14 strikouts in 57 at bats. Which means his strikeout average (.246) actually much higher than his batting average.

When the season began, the only baseball video game worth a flip, MLB The Show 20, had each player with 85 ratings which fall into the Diamond category, the highest in the game.

After their early seaosn struggles, both players have now been downgraded to gold status.

Both Springer and Altuve have lost their diamond ratings in MLB The Show pic.twitter.com/kNuSnAWdJE

In their favor, as far as the cheating effect goes, Alex Bregman is still slugging .500 and Carlos Correa is batting .293, and both of them were deeply implicated in the Astros sign-stealing scandal.

Perhaps Altuve and Springer are just more affected by the fact that pretty much everyone outside of Houston wants to do what Dodgers pitcher Joe Kelly did to Astros hitters a couple of weeks back.

The new @MLBTheShow came out two hours ago and people are already hitting the Astros pic.twitter.com/0sl3cWIKLd