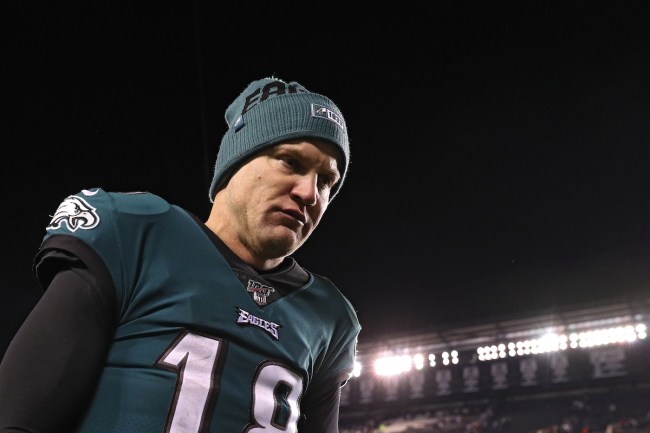 Remember when Josh McCown was signed by the Philadelphia Eagles during the 2019 NFL Playoffs as an emergency quarterback — and he actually had to play on a torn hamstring because of the team’s lack of depth at the position? Or when the New York Jets brought in the wily veteran a couple years ago and the dude signed the contract while waiting for food in a Chick-Fil-A line? Yeah, that all seemed OK since McCown was a player, but could he become the next head coach of the Houston Texans? That’s something more people aren’t too thrilled about.

According to Mike Garafolo, though, the Texans are seriously considering McCown, who has zero head coaching experience.

The #Texans are exploring the idea of Josh McCown as head coach but would surround him with at least one former head coach on the staff. Again, not as crazy as it might seem to go from player to head coach. And if anybody can do it, McCown can.

If you’re a Texans fan, the news that Josh McCown could be the team’s next head coach has to be confusing AF. This is a team that reached the NFL Playoffs in four out of five years prior to this season. It’s a team with a franchise quarterback (Deshaun Watson). And while Watson has cryptically tweeted a presumed desire to get traded this offseason, the Texans are hoping to reconcile this current awkward situation with the 25-year-old.

Would hiring McCown do that? If you as people on Twitter, absolutely not, because look at some of the reactions to the news reported by Mike Garafolo.

Why isn’t it as “crazy as it might seem?” There’s a bunch of guys who’ve been coordinators for years who deserve a shot. But the former Zoom QB consultant jumps the line? Seems pretty crazy

ARE YOU KIDDING ME. THEYRE HIRING A FREAKING PLAYER OVER ERIC BIENIEMY WTF

So McCown is qualified to be a HC, but Bieniemy isn’t 🤔

Media: the most qualified person should get the job, merit is important

Not surprised one bit by this, it seems like they’re really doing everything within their power to get Watson Out of town.

This would be an incredibly horrible idea. Current state of Houston Franchise pic.twitter.com/XHSOZ4pD2i

The Texans are in a tough situation, as they’re not quite sure if they’re going into full-blown rebuilding mode, or if they’re still trying to develop players and build around Watson. That’s never a good place to be in as a franchise. And while Deshaun Watson may be upset about not being involved in the search for the next head coach and/or general manager, imagine how pissed he’ll be if the franchise hires Josh McCown, who, albeit smart and savvy as a player, doesn’t have any experience leading a team. That probably won’t sit well with the Pro Bowl signal-caller.

Watson reportedly wanted Chiefs offensive coordinator Eric Bieniemy to get the gig in Houston. That seems like a pipe dream at this point. So, yeah, good luck trying to smooth things over with the face of the franchise here, Texans, especially if a first-time coach is hired.