J.R. Smith Reveals Everyone On The Cavs Bench Was Scared To Death Of LeBron After J.R.’s Game 1 Finals Blunder 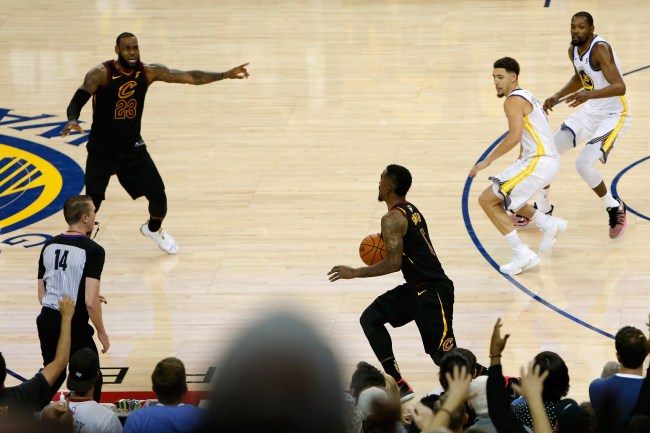 J.R. Smith provided the world with the most meme-worthy moment of the 2018 NBA season when he inexplicably dribbled the clock out instead of shooting an easy layup in Game 1 of the Finals. The Cavs would go on to get swept by the Warriors, so it wouldn’t have shifted the narrative either way, but still, holy shit.

Smith, who remains an unsigned free agent at the moment, went on Showtime’s new podcast “ALL THE SMOKE” with hosts Matt Barnes and Stephen Jackson and described what has been dubbed one of the biggest blunders in Finals history.

The uncut footage of the Cavs processing the mistake on the bench before overtime features a livid LeBron, refusing to acknowledge Smith’s existence, being consoled by teammate Jeff Green.

LeBron’s anger was only exacerbated when Cleveland coach Tyronn Lue told him the Cavs had a timeout remaining.

“Man I tell you it’s like when LeBron asked ‘do we have any timeouts’ and nobody wanted to answer the question. I’m telling him all the way to the bench ‘we got a timeout!’ I said bro! ‘Why aint you just call timeout.’ That’s what we was talking about. He ask, ‘do we got a timeout? DO WE GOT A TIMEOUT?’ and when I tell you some of the players just looked away and the coaching staff look like they turned spooked white as a ghost. I was crying in my room. Crying laughing in my room.”

Hey, if anything came of it, it’s this photo that may as well be a Renaissance painting.

this moment is going down in nba history pic.twitter.com/0BoTKFzXU0

JR went for the Henny instead of the win 😂 pic.twitter.com/SfQkR7bFWo

LeBron can recall every single possession in a 48-minute game. JR doesn't even know the score.